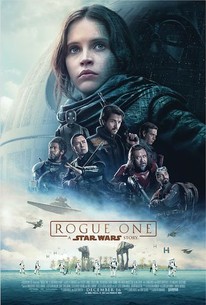 Critics Consensus: Rogue One draws deep on Star Wars mythology while breaking new narrative and aesthetic ground -- and suggesting a bright blockbuster future for the franchise.

Critics Consensus: Rogue One draws deep on Star Wars mythology while breaking new narrative and aesthetic ground -- and suggesting a bright blockbuster future for the franchise.

Critic Consensus: Rogue One draws deep on Star Wars mythology while breaking new narrative and aesthetic ground -- and suggesting a bright blockbuster future for the franchise.

From Lucasfilm comes the first of the Star Wars standalone films, "Rogue One: A Star Wars Story," an all-new epic adventure. In a time of conflict, a group of unlikely heroes band together on a mission to steal the plans to the Death Star, the Empire's ultimate weapon of destruction. This key event in the Star Wars timeline brings together ordinary people who choose to do extraordinary things, and in doing so, become part of something greater than themselves.

May Bell
as Jedha Server

Critic Reviews for Rogue One: A Star Wars Story

There are Suicide Squad-level moments of confusion, weak characters and regressive storytelling that left me downright angry.

Apart from Ben Mendelsohn's weaselly Orson Krennic [and perhaps Donnie Yen]... the faces are unmemorable and the characters unexceptional, their meaningful glances unearned.

Rogue One is largely free of the weight of myth and expectation that were borne by The Force Awakens, and this turns out to be both a good and a bad thing.

Not just a dull but an oppressive experience, being force-fed a corporate product: a film that never comes alive, with none of the characters properly developed, none of the relationships gelling, the very adventure formulaic.

Edwards appears to have elevated what could have been simply a cash-in into something that feels essential, even magical. It has the distinct smell of victory.

Its much more than a simple spin-off, is one of the highest chapters of the entire saga. It takes as its starting point a simple dialogue from Star Wars: Episode IV- A New Hope and transforms it into a heroic 2-hour requiem[Full review in Spanish]

The set-pieces -- particularly the finale at an Imperial based on the tropical planet Scarif -- have a grittiness to them that we haven't seen since that battle on Hoth.

Rogue One indeed stands alone as a great Star Wars story outside the Episodes.

Taking a familiar yarn and telling it in a way that has you on the edge of your seat? That's storytelling modern George Lucas would die for.

Felicity Jones impresses in this thrilling addition to the Star Wars franchise.

Audience Reviews for Rogue One: A Star Wars Story

Rogue One finally explores a bit of the expansive Star Wars universe that novels/comics and games have been doing for years. Does it do the franchise justice? In many and most ways yes. It's certainly a great addition to say the least as a standalone film and connecting film between "Revenge of the Sith" and "A New Hope" A familiar story of a rag-tag group of unlikely rebels banding together for a common cause against a much larger, impossible force... Rogue One sure follows the premise to a T. So much that a lot of the project would have fallen short if not for the established iconography of existing SW franchise material. However that can only take the movie so far. The rest of it hinges on a colorful cast of characters that must deliver a compelling if not memorable story of their own and unfortunately some just do (K-2, Chirrut, Baze) more than others. (Cassian, Bodhi) The unevenness in their effective character presentation becomes more apparent during the climatic final acts when things start blowing up. If more time was carefully spent making each of the key Rogue One cast stand out with quirks and interactions instead of the grandeur of action and explosions that was the Empire vs Rebel assault then the film would have benefited exponentially. But as the film closes what we have is a very good "Star Wars Story" and nothing could ever take away from that. The nod at existing material didn't feel cheap (Except maybe C-3PO & R2D2 or CGI-face Tarkin) and the new characters felt real enough that their sacrifice mattered. This all on the backdrop of a serious War-drama without the hindrance of prophecies, destiny and space knights/royalty? A big plus!

A technically well-done movie. It has action, humour, really impressive CGI it has everything you could want from a movie. But as a non star wars fan this movie offers little in the way of original narrative, leaving me feel slightly unimpressed by this movie.

Rogue One is well done from a technical standpoint. It has awe-inspiring special effects, meticulous production design, and a rousing score. It draws from a universe of films that I already adore. Well, 4 out of 7 anyway. (Those prequels are pretty weak.) The epic long battle, which comprises the second half, is impressive but it lacks a key component - our emotional attachment. Probably because the script hasn't engendered our love for these individuals. That's a key dilemma. The original trilogy embodies three of the most entertaining movies ever made. The grim Rogue One doesn't even feel like the same universe. Luke, Han, and Leia were captivating, but there's not one person here to make this story interesting. The chronicle certainly isn't necessary. It's merely an assembly line product efficiently produced to make money. You don't need this other than to answer a lingering question. Why did a design flaw exist enabling the Rebel Alliance to launch torpedoes into a tiny exhaust vent and blow up the Death Star? Rogue One uses 133 minutes to basically give us an answer. Thanks for the fan fiction, but you could've just told me. fastfilmreviews.com