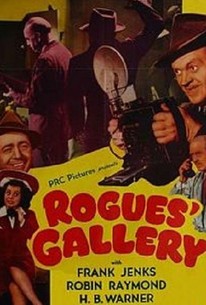 The second of two PRC vehicles for veteran featured player Frank Jenks (the first was Shake Hands with Murder), Rogues' Gallery casts Jenks as Eddie, a wisecracking photojournalist. Teaming up with intrepid girl reporter Patsy (Robin Raymond), Eddie sets out to get an exclusive interview with Reynolds (H. B. Warner), inventor of a new listening device. Before they know what's happening, our hero and heroine are knee-deep in murder. As it turns out, Eddie had only to look over his shoulder to determine the killer's identity. As PRC films go, Rogues' Gallery is bright and snappy entertainment.

John Valentine
as Board Member

Parker Gee
as Detective
View All

There are no critic reviews yet for Rogues' Gallery. Keep checking Rotten Tomatoes for updates!

There are no featured reviews for Rogues' Gallery at this time.