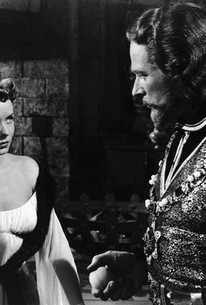 Decked out with leftover sets and stock footage from 1946's Bandit of Sherwood Forest, Columbia's Rogues of Sherwood Forest stars John Derek as the son of legendary do-gooder Robin Hood. When King John (George Macready) revives his old cycle of taxation and repression, Robin Jr. summons forth his father's Merry Men and inaugurates a rebel movement. Aiding the younger Robin in his fight for rights is Lady Marianne (Diana Lynn), who exhibits a lot more leg and decolletage than was customary in 13th-century England. Prominent among the Merry Men is Little John, played by Alan Hale Sr., who'd previously essayed the same role in the 1922 and 1938 filmizations of Robin Hood. Attractively lensed in Technicolor, Rogues of Sherwood Forest seems far more expensive and ambitious than it really was.

Lowell Gilmore
as Count of Flanders

Billy Bevan
as Will Scarlett

Gilliam Blake
as Lady in Waiting

Byron Poindexter
as Man
View All

There are no critic reviews yet for Rogues Of Sherwood Forest. Keep checking Rotten Tomatoes for updates!

There are no featured reviews for Rogues Of Sherwood Forest at this time.