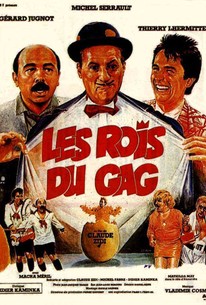 Gaetan (Michel Serrault) is a television comic whose jokes have kept his program alive, but in more recent times, his senior gag writers have not had their hand on the pulse of his changing audience. A series of circumstances bring two young cafe-theater comedy writers to the rescue (Thierry Lhermitte and Gerard Jugnot), partially due to Gaetan's efforts. The new material is so successful that Gaetan is offered the lead in a serious feature-length movie, and if he had any hesitation about the venture, his wife squelched it with visions of a higher social and economic standing for them both. But the project does not go exactly as planned, and before he knows it, Gaetan runs into trouble. ~ Eleanor Mannikka, Rovi

Mathilda May
as Alexandra

There are no critic reviews yet for The Gag Kings (Les Rois du Gag). Keep checking Rotten Tomatoes for updates!

There are no featured reviews for The Gag Kings (Les Rois du Gag) at this time.