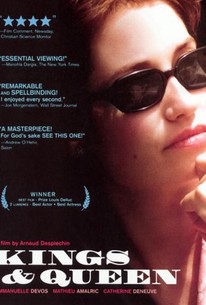 The stories of two desperate characters turn out to share an important link in this drama from French filmmaker Arnaud Desplechin. Nora (Emmanuelle Devos) is a woman in her mid-thirties who wants people to believe that her life is going just the way she wants. But a look below the surface shows this isn't quite the case; she's been divorced twice, her latest relationship is on the rocks, her ten-year-old son, Elias (Valentin Lelong), is becoming increasingly withdrawn, and her father (Maurice Garrel) is in poor health. When Nora learns that her father's digestive problems are actually cancer and he may only have a few days left to live, she desperately wants to turn to Ismael (Mathieu Amalric), her second husband. But Ismael is having a crisis of his own after a pattern of increasingly strange behavior has led him to an involuntary stay in a mental hospital.

It adds up to more than the sum of its parts, but you may not realize it for a day or so.

Desplechin's big, bold, iconoclastic feature Rois et Reine is a disconcerting film that can turn your head at the oddest moments.

While these characters' lives are melodramatic, individual scenes burst with kinetic energy from fast editing and an script that deftly underscores the destructive nature of male-female relationships.

There's a looseness to the camera work and storytelling that's appealingly breezy: This film feels, for better or worse, like real life.

Kings and Queen, full of passion and humor, madness and grief, is close to a masterpiece.

A very bittersweet film about the traps of loneliness, the difficulties of marital relationships and the philosophical dilemmas of family ties. [Full review in Spanish]

Desplechin's brilliant new effort is not so much a film about mad people, but one, perhaps like [Lars von Trier's] The Idiots, with a madness running through it... A treat from start to finish.

A willing victim, a godlike father, the collusion between the two and from this perversion comes deep and unsettling woes -- it's an odd concoction, one part hemlock to two parts froth. But I think I've seen it all before, and before and before.

a complex, character-driven film that never allows its themes - madness, love, coming of age - to become reducible to pat formulae, or over-sentimentalisation.

Its novelistic breadth, pitched intensity and on-the-fly shooting style pull the viewer smack-dab into the middle of these lives.

One of the many joys and sadnesses of this necessarily long film are the way in which characters motivations and true feelings are gradually revealed as the film progresses, so that what starts out as a relatively straightforward drama becomes more complex, emotive and absorbing. Two skilled lead performances and two very different, flawed characters (but who basically both want escape) are at the centre of this compelling, funny, moving and truthful piece of cinema.

Pretty interesting return to the screen for Catherine Deneuve in an ensemble piece directed by Arnaud Desplechin. Not familiar with Desplechin's work in the past but this is a good introduction.

An interesting film to be sure, and definitely worth a watch. Mathieu Amalric delivers a winning performance that shines above all else. This french melodrama again shines the dark and hidden side of a slice of life; what appears normal isnt and what appears happy and full may be in fact empty and sad. No real winners or losers at film's end except the viewer who will appreciate this rather rich story that has alot of depth and truth.

[font=Century Gothic]"Kings and Queen" starts out with Nora(Emmanuelle Devos) introducing herself directly to the camera. She is 35, runs an art gallery and has a ten year old son, Elias, by her first husband. The first husband died while she was pregnant. Her second husband, Ismael(Mathieu Amalric), wants to be dead, too, at least judging by the noose hanging over the chair in his apartment when the men in white coats come for him.(And I would like to say I was disappointed that they weren't carrying butterfly nets...Luckily for him, his psychiatriast is played by Catherine Deneuve.) Nora is about to marry husband number three in a couple of weeks. The latest model is unlike the first two - totally rich, responsible and quite boring. On a visit to Grenoble to visit her father and son, Nora learns that her father is dying and has very little time left. [/font] [font=Century Gothic][/font] [font=Century Gothic]"Kings and Queen" is an intelligent, thoughtful movie about growing older, learning responsbility towards taking care of others and what family means. It also makes a point about how we all have an affect on everybody around us, even if we don't realize it. The performances by both Devos and Amalric are superb. [/font]