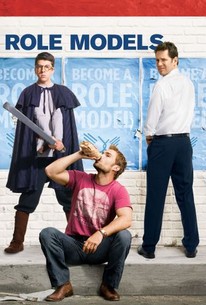 Danny and Wheeler trash a company truck on an energy drink-fueled bender. Upon their arrest, the court gives them a choice: do hard time or spend 150 service hours with a mentorship program. After one day with the kids, however, jail doesn't look half bad. Surrounded by annoying do-gooders, Danny struggles with his every neurotic impulse to guide Augie through the trials of becoming a man. Unfortunately, the guy just dumped by his girlfriend has only sarcasm to offer a bashful 16-year-old obsessed with medieval role play. Meanwhile, charming Wheeler tries to trade in an addiction to partying and women to assist a fifth-grader named Ronnie redirect his foul-mouthed ways. It would probably help if Ronnie's new mentor wasn't an overgrown adolescent whose idea of quality time includes keggers in Venice Beach. Once the center's ex-con director gives them an ultimatum, Danny and Wheeler are forced to tailor their brand of immature wisdom to their charges. And if they can just make it through probation without getting thrown in jail, the world's worst role models will prove that, sometimes, it takes a village idiot to raise a child.

Rudd and Scott aren't stretching any new muscles, but Rudd's glum disaffection and Scott's bozo bonhomie do gel with a satisfying stickiness. They handle the gaping innuendo with such delicacy we know that they know they're better than this.

Role Models could have been another formulaic comedy, fresh off the assembly line. Instead, the work of Paul Rudd and Seann William Scott here is worthy of praise and one of the funnier films this year.

Role Models is a film for the nerds, by the nerds. Lucky for Role Models, the rest of our culture is catching up and are invited along as well.

No one is going to marvel at the actors' Stanislavsky-like artistry, but Scott and Rudd are fun to watch and their bickering is hilarious...

A great example of the Emotionally Stunted Men Grow A Heart sub-genre. Role Models staves off the January blues and puts a marker down as 2009's laugh-out-loud comedy to beat.

'Role Models' isn't trying to reinvent the wheel, just polish it up a little. What emerges is a memorable slice of modern slapstick, with charm to spare and just a touch of soul.

Just when a heartrending moment draws the audience in, a jolting blast of vulgarity induces inescapable laughter.

A 10-year-old who has no problem dropping the F-bomb? Parents are likely to cringe and/or think they accidentally walked into a Billy Bob Thornton movie.

There just isn't enough here to warrant spending two hours on, especially when it's all been done before, and better, somewhere else.

Director David Wain wrongly seems to think that puerile, lewd behaviour is funny by default; subtlety is not in his repertoire.

The cringe-inducing moments... will offend anyone who isn't an adolescent (or adolescent-minded) boy and will likely keep Rudd from seeing the same success Black experienced.

Role Models flourishes thanks to a deceptively simple formula: It's well-written, superbly directed, and features charismatic leads and a comedically gifted ensemble.

Too much fun! Two men-children become big brothers to a fantasy geek and a foul-mouthed delinquent, and heartwarming hilarity ensues. The inside look at the LARP community and the integration of the KISS motif culminates in some great deadpan humor, victorious redemption, and of course, ye olde goofy Englishisms.

I can't imagine why I originally gave this 4 stars. It is pretty average.

Sean William Scott and Paul Rudd come together and produce a comical-bromantic-based story. With their costars shining as bright as the main stars, the film presents a funny atmosphere with the typical satirical feel. A clever script/plot bounded together with a joyous and hysterical hold. 4.5/5

Other than I have never liked the character Stifler whom Seann Scott plays in this movie (although he's called Wheeler here), the movie is pretty good. Two immature guys get to substitute community service for jail time. The community service involves mentoring two teens - and of course, it is not obvious who is benefiting the most - the adults or the kids.