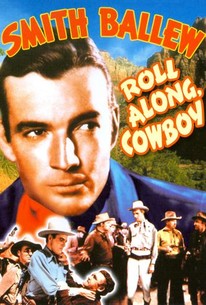 Roll Along, Cowboy was the second starring vehicle for Smith Ballew, producer Sol Lesser's answer to Gene Autry. Our hero reports for work at the ranch of middle-aged Ruth Robinson, only to find that she's being threatened by outlaws. With a song in his heart and a gun in his holster, Ballew routs the villains and wins the hand of Robinson's pretty daughter Cecilia Parker. The supporting cast includes former "Our Gang" regular Wally Albright and future cowboy star Gordon "Wild Bill" Elliot. According to the credits, Roll Along, Cowboy was based on a Zane Grey story, but doesn't say which one (Grey's novel were noticeably bereft of singing cowboys).

The Saddle Tramps
View All

Critic Reviews for Roll Along, Cowboy

There are no critic reviews yet for Roll Along, Cowboy. Keep checking Rotten Tomatoes for updates!

There are no featured reviews for Roll Along, Cowboy at this time.