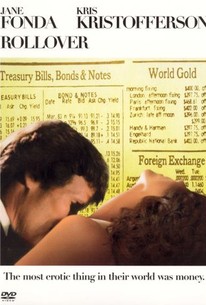 Alan J. Pakula directs the political thriller Rollover, produced by leading lady Jane Fonda's production company, IPC Films. Featuring a racist plot and negative stereotypes about the Arab world, this film reflected the American fear of the Middle East prevalent in the early '80s. Fonda stars as former film star Lee Winters, who inherits a multimillion-dollar company when her corporate bigwig husband is murdered. She teams up with banker Hubbell Smith (Kris Kristofferson) in order to find her husband's killer and survive in the world of high-stakes international finance. They become lovers and travel together to Saudi Arabia to secure a loan and to guarantee Lee's spot as the company's board chairman. However, they end up discovering an Arab company's plan to withdraw money from the world's banks in order to destabilize the Western economy. Rollover also stars Hume Cronyn and Josef Sommer. This story also foreshadowed Jane Fonda's marriage to corporate bigwig Ted Turner in 1991.

Art Lambert
as Pianist
View All

The dramatic possibilities of the material are weak at best, and its satirical underpinnings are nowhere to be found.

Alan J. Pakula's Rollover is a moody, evocative, wispy thriller that makes some intriguing moves before dissolving like a wet tissue in irresolution.

The movie, once viewed, may seem farfetched, but then so was everything from sliced bread to men in space until it actually came to be.

Perhaps I might have liked it if I knew what it was all about.

A talented filmmaker made a thriller that was absolutely no better than it had to be, and indeed it is quite thrilling, when it is not forcing us to watch its cardboard characters.

Rollover provides an intriguing escapist glimpse of the privileged world of phone-equipped limos and dinner parties.

There are no featured reviews for Rollover at this time.