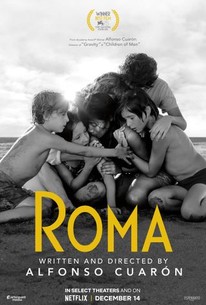 Critics Consensus: Roma finds writer-director Alfonso Cuarón in complete, enthralling command of his visual craft - and telling the most powerfully personal story of his career.

Critics Consensus: Roma finds writer-director Alfonso Cuarón in complete, enthralling command of his visual craft - and telling the most powerfully personal story of his career.

Critic Consensus: Roma finds writer-director Alfonso Cuarón in complete, enthralling command of his visual craft - and telling the most powerfully personal story of his career.

The most personal project to date from Academy Award (R)-winning director and writer Alfonso Cuarón (Gravity, Children of Men, Y Tu Mama Tambien), ROMA follows Cleo (Yalitza Aparicio), a young domestic worker for a family in the middle-class neighborhood of Roma in Mexico City. Delivering an artful love letter to the women who raised him, Cuarón draws on his own childhood to create a vivid and emotional portrait of domestic strife and social hierarchy amidst political turmoil of the 1970s. Cuarón's first project since the groundbreaking Gravity in 2013, ROMA will be available in theaters and on Netflix later this year.

Roma will be studied for years as a landmark in cinematic storytelling, made even more meaningful because it pays tribute to a character who is usually in the background.

In Cuarón's films, cinema conjures up its own world, and this one provides the chance to explore it with him more intimately than ever before.

It's beautiful story, he shot it himself along side writing and directing, at this stage we can see it in a bunch of different places, its on Netflix & in theaters, but go see it in theaters!

Aparicio, in her acting debut, is remarkable.

Cuarón fills every corner of the frame, just as Fellini did, so that the eye has to roam the screen as though scouring a fresco. But for all the bustle and brio, it's a visually lucid movie.

This has plenty to say about class relations too, but what's most impressive about it is how the Mexican writer-director-cinematographer-editor transforms even his political observations into the stuff of big-screen spectacle.

Roma deals in complicated subject matter - socioeconomic inequality, broken families, loss - but never in a way that dehumanizes its characters or detracts from the power of its central story.

The keen and sensitive understanding of what the lives of women are what Cuaron displays here, and deploys with such enormous empathy...

Alfonso Cuaron's masterful Roma is a semi-autobiographical epic that reminds us that cinema is art.

A staggering swirl of life, a film that destroys and uplifts simultaneously.

In her first feature film debut, Aparicio gave a performance that though quiet in execution, was powerful.

Roma represents a major shift in the movie world.

Roma is a personal and tumultuously grounded story that's beautifully crafted and shot by Alfonso CuarÃ³n. Held together by its backdrop of 1970s turmoil in Mexico as well as the intimate struggles that coincide make this film the director's best and most earnest in his career as well as arguable for one of the best of the year. 4/5

Tough movie to write about! Do you call out the bizarre moments, like the car parking in dog shit or the man in a new year's demon costume singing? That wouldn't do it justice. Sure, it's artsy. It's no tough watch, though. It flows well and once you get the basic idea of what it's about, you can relate to Cleo and the things happening to her. Thankfully, it's no misery porn. The biggest feat are the gorgeous panorama shots, most of which you'd want to hang on your wall as black and white pictures. The movie does feel oddly distanced at times but emotions strike even stronger when they ultimately do, like in the solution. It's easy to admire Roma for its artistry on every level. Award buzz and highlight of the year? I dunno. An unusual and worthy must-watch? Absolutely.

Movies that are simply about life don't seem to come around often enough, so when one makes it into the limelight, it feels like something special if done correctly. Being in Spanish throughout the majority of the film, the sad truth is that most English-speaking American and Canadian citizens will probably be turned off, but if you're someone who doesn't mind watching a foreign film, I honestly don't think you'll find many films that are better than Roma in all of 2018. This film explores the story of a family in ways that I haven't seen present on the screen in quite some time. If you're a film fanatic, here's why (especially to you) I just can't recommend this movie enough. Following a family, as they deal with the hardships of dealing with the harsh realities of what some families go through, Roma focusses on their housemaid in Cleo. Becoming a very good friend of the family, her story is chronicled through the time she spends with them, just as much as she spends time with her friends as well. With a side story that had me sobbing throughout the third act, I truly can't remember when movie left my jaw on the floor in terms of an emotional impact. This is a film that cares solely about these characters and I was completely invested in each and every one of them. Written and directed by the incredibly talented Alfonso Cuarón, this film is showcased in a way that has the audience feel as though they're peering in on a family in crisis. This movie is an observation of family life and how rapidly it can change. Throughout horrible consequences or brief, happy moments, Alfonso Cuarón is able to display breathtaking cinematography that makes the movie itself feel like a character telling its own story. When a filmmaker can accomplish something like that, with long takes to further deepen the story, you know we have a gem on our hands. This man doesn't make enough films as far as I'm concerned and this is just another piece of impeccable entertainment that he can add to his resumé. Having never seen Yalitza Aparicio appear in anything before this appearance as the leading lady in Roma, I can confidently say that she should absolutely quit her day job if it isn't acting. Not only did she sell herself as this character in a way that stuck with me, but her expressions that range from fear to sadness, joy to love, and even devotion to commitment, her performance had my eyes glued to the screen for the full 135 minutes. Even though it may seem lengthy to some, I didn't think a single frame of this movie was wasted. Even throughout the slow moments, there were multiple levels of storytelling going on. When such a simple premise can be made to feel this epic in scale, I have nothing but unrequited love for it. In the end, Roma doesn't just have it all in terms of writing and directing, but those aspects are taken to new heights throughout these performances and the overall film that has incredible emotion throughout, ultimately builds to a couple of different climax's, and each of them feel either earned or absolutely shocking. As I mentioned, there was a specific moment toward the end of the movie where I just couldn't help but open my jaw wide. The payoff of one of the storylines is absolutely nothing what I expected. Roma is emotionally powerful from start to finish and I simply can't recommend it enough. Now streaming on Netflix of all places and probably up for many awards in the coming months, Roma is a true gem.