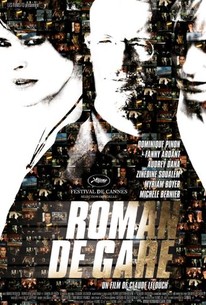 Critics Consensus: Claude Lelouch has crafted an engaging thriller about murder and romance with plenty of stylistic panache.

Critics Consensus: Claude Lelouch has crafted an engaging thriller about murder and romance with plenty of stylistic panache.

Critic Consensus: Claude Lelouch has crafted an engaging thriller about murder and romance with plenty of stylistic panache.

Claude Lelouch's thriller Roman de Gare (aka Crossed Tracks) features a number of characters and a timeline that skips back and forth, keeping the audience guessing as to how these characters all relate to each other. Fanny Ardant plays a novelist named Judith whose famous works might have been ghost-written by a serial killer dubbed "The Magician" for his habit of performing acts of prestidigitation in front of his victims. Early in the film, the police quiz her about her relationship with the criminal. Other characters include a hairdresser (Audrey Dana) who offers to give a ride to a stranger who may be the killer.

Shaya Lelouch
as Sabrina
View All

The air of Gallic nonchalance ensures you have a lot of fun watching Pinon and Ardant match wits. It's Dana, however, who anchors the story.

An engaging, enjoyable slice of suspense from the French.

Red herrings abound and audience frustration sets in. It's a pity because the film looks good and the Gilbert Becaud songs on the soundtrack are easy on the ear.

It's filled with intriguing characters, it has a fascinating initial premise -- and then it runs off the rails.

Lelouch is now 71 years old, and I bet he's never had as much fun with a film. Roman de Gare threads plots and characters and twists together like a demented weaver.

Even if the game isn't entirely successful, it's fun to play along.

It's awesome to see the director having continued to crank out thought-provoking, challenging and effective cinema even if the film doesn't quite fire on all cylinders.

Lelouch's is a pleasingly serpentine story that will keep viewers guessing.

Lelouch's splintered narrative, mostly related in flashback, plays games with the characters without delivering much of a payoff.

Stylist Claude Lelouche (A Man and a Woman) is still full of surprises in his choice of genres and subjects.

Is it supposed to be funny, tragic or what? Even the characters don't seem too sure.

There's a lushness and emotional charge here that makes this very watchable. Don't expect poetry, though; it's more like a good crossword puzzle.

At the end of act one we discover the answers to many of the film's questions: is this guy a rapist on the run, a ghost writer, or a man abandoning his family? Structurally, this is awfully early to answer so many questions that have such import on the ensuing action. But the rest of the film does not disappoint. Despite its structural flaws, it's still able to re-invent itself as it moves along. Exceptional performances by he of the interesting-looking face, Dominique Pinon, and Audrey Dana, who plays the emotionally damaged but still somehow indomitable Huguette, keep us caring about these characters no matter what story imprisons them.

a quite well plotted and acted thriller.

Seemed promising to me, but ended up as just another not-so-bad drama. It's okay for one time watch though.