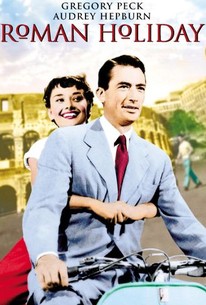 Critics Consensus: With Audrey Hepburn luminous in her American debut, Roman Holiday is as funny as it is beautiful, and sets the standard for the modern romantic comedy.

Critics Consensus: With Audrey Hepburn luminous in her American debut, Roman Holiday is as funny as it is beautiful, and sets the standard for the modern romantic comedy.

Critic Consensus: With Audrey Hepburn luminous in her American debut, Roman Holiday is as funny as it is beautiful, and sets the standard for the modern romantic comedy.

Fathom Events, Turner Classic Movies and Paramount Pictures are delighted to bring the 1953 American romantic-comedy classic, Roman Holiday, back to the big screen in cinemas nationwide for a special two-night event on Sunday, November 29 and Tuesday, December 1. Starring Gregory Peck and Audrey Hepburn and directed by William Wyler, Roman Holiday won three Academy Awards (R) for Best Actress in a Leading Role, Best Costume Design and Best Writing. In this timeless classic, Hepburn is at her transcendent best as a sheltered princess who falls for an American newsman in Rome. This film is rated MPAA PG 13. Bonus content not rated. (C) 2015 Paramount Pictures. All Rights Reserved.

John Horne
as Master of Ceremonies

Edward Hitchcock
as Chief of Correspondents

Rapindranath Mitter
as The Maharajah

Princess Lilamani
as The Raikuuari

Hepburn represents all western cinema, finally allowed out to play on the cobbled streets of postwar Europe.

The newcomer named Audrey Hepburn gives the popular old romantic nonsense a reality it has seldom had before.

For lovers of romantic comedies through the ages, Roman Holiday remains a favorite.

[Wyler] times the chuckles with a never-flagging pace, puts heart into the laughs, endows the footage with some boff bits of business and points up some tender, poignant scenes in using the smart script and the cast to the utmost advantage.

...a somewhat overlong and exceedingly deliberate endeavor that undeniably grows more and more absorbing as it unfolds...

An utterly disarming romantic comedy. The "Mouth of Truth" scene is a genuine classic, but the film is packed with equally delightful interludes.

Hepburn is a marvel, mixing deep pathos with a restless yearning. She also proves to be a gifted comic. I cannot praise her performance effusively enough.

The marrying of a classic movie with the most up to date technology makes this release a must-have.

None of the events are terribly thrilling or romantic, and the unhurried casualness with which they're all approached borders on boring.

A sweet and charming romantic comedy with Audrey Hepburn in her first major role (which earned her the only Oscar of her career), and it finds the perfect balance between funny and captivating, with the lovely city of Rome as eye-candy setting - where it was shot in its entirety.

"Roman Holiday" is remarkable just because Audrey Hepburn isn't gratingly over-the-top as she is in most movies. "Roman Holiday" is well-scripted and well-acted with gorgeous visuals shot on location in Italy. It's a charming film with wit fresh enough for a modern audience.

No question that it's a classic, as Audrey Hepburn's debut and a fine example of the Do The Right Thing roles that Gregory Peck excelled in: family friendly with a few laughs and revolving around a one-day blossoming of an impossible love. Hepburn overacts a bit, and I could take or leave the supporting cast, but it's a charming relic that's worth seeing once, and features a Rome very different than the iconic city we saw in Italian post-war films.

A light-hearted and innocent rom-com that set the bar for movies to come. With such an age, "Roman Holiday" should, by every right, be considered a conventional and cliche movie, but it surpasses due to its palpable and saturated chemistry and genuinely hilarious moments. You've got strong writing here, you got incredible performances, and you got ingeniously creative moments. How come the rom-coms that come out in 2012 is worse than a 1953 flick? I guess Hollywood never learns to adapt.