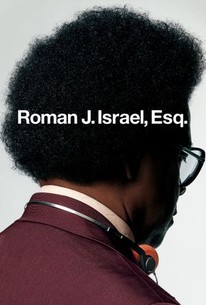 Critics Consensus: Intriguing yet heavy-handed, Roman J. Israel, Esq. makes the most of -- but never quite lives up to -- Denzel Washington's magnetic performance in the title role.

Critics Consensus: Intriguing yet heavy-handed, Roman J. Israel, Esq. makes the most of -- but never quite lives up to -- Denzel Washington's magnetic performance in the title role.

Critic Consensus: Intriguing yet heavy-handed, Roman J. Israel, Esq. makes the most of -- but never quite lives up to -- Denzel Washington's magnetic performance in the title role.

Roman J. Israel, Esq. is a dramatic thriller set in the underbelly of the overburdened Los Angeles criminal court system. Denzel Washington stars as a driven, idealistic defense attorney whose life is upended when a turbulent series of events challenge the activism that has defined his career. Colin Farrell costars as the ambitious, monied lawyer who recruits Roman to his firm.

Where to Watch Every 2018 Oscar Nominee
New On DVD in February: Coco, Three Billboards, Only the Brave and More
SAG Awards 2018 Winners — Full List

It's a brilliant performance in a film that's an honorable misstep.

There's an interesting drama in there, but it has not been given time to fight its way out of the semi-digested mulch all around.

We don't learn very much about Israel's relationships or motivations from the screenplay, but it's fascinating to watch Washington's display of repressed turmoil.

The results are entertaining and watchable, but always slightly, oddly out of sync with the eponymous turn.

A Washington vehicle in the purest sense, one whose whole reason for being is the fact that he's in it.

Through his sheer learned technique and presence, Washington sells this one.

Tries to be a morality play, a character study, an indictment of the unjust legal system and occasionally a thriller, a romance and a drama about mental illness.

The movie tries to walk a razor's edge and almost pulls it off.

Although the motives for Roman's eventual extra-legal maneuver are not entirely credible, Gilroy's aim was to investigate the toll exacted by a 40-year commitment to ideals that are "bigger than yourself."

What we have here is one of the finest performances of Denzel Washington's long and extraordinarily consistent career.

A richly subtle compelling character study which struggles to overcome its own meandering plot.

Denzel Washington delivers one of the strongest and most multifaceted performances of his career in a decent, if flawed film that knows how to explore the personality and motivations of such a complex protagonist, even though it nearly gets lost in a confused third act.

After his brilliantly dark urban thriller Nightcrawler in 2015, a lot of eyes were on director Dan Gilroy with an eagerness to see what he'd deliver next. Roman J. Israel, Esq promises to be just as intriguing but it lacks the dramatic drive that made Gilroys's last film such captivating viewing. That said, it boasts a strong lead performance that's enough to maintain your interest. Plot: Roman J. Israel, Esq. (Denzel Washington) is an a idealistic defense attorney who likes to work behind the scenes. However, when his colleague dies suddenly, Roman is forced to look for other work. He's hired by another law firm who have heard of his fastidious approach to the job but by this time Roman has crossed a professional (and personal) boundary that leads to some serious implications and both his job and his life in danger. Dan Gilroy's legal drama opens with an intriguing concept of our main character's intention to have himself disbarred from legal practise by writing a memo that proposes that he will both prosecute and defend himself due to his personal indescretions. From here on it goes on to depict Roman J. Israel Esq. as a socially awkward but very competent and meticulous individual who has a passion for civil rights. Embodying this interesting character is, of course, Denzel Washington who delivers another wonderfully realised character to his already impressive resumé. Washington has been Oscar nominated for his work here and although it's unlikely that he'll win, this is still some solid work. That said, despite his good work, he's not entirely afforded a strong enough script to warrant his commitment. There's a lot of potential here but that's probably what makes it a slightly frustrating affair as it doesn't quite have enough of a dramatic punch to get things moving and Gilroy's decision to go for a more restrained approach, somewhat, takes the wind out the film's sails. Despite its great premise it doesn't really flesh it out when it actually comes to it. It spends plenty of time on the how and why but doesn't really and keep good on its promises. A serviceable legal thriller that has good intentions but ultimately doesn't really go anywhere. That said, it boasts a great lead performance from Denzel and strong, cutthroat support from Colin Farrell but it's just a shame that the film doesn't capitalise on these two as it's left with a script that has an air of mediocrity to it. I enjoyed this slow-moving legal drama but it needed an adrenaline shot and left me feeling that it was a missed opportunity. Mark Walker

The fact that this film can at least maintain some sort of interest throughout is only a testament to how great an actor Denzel Washington is. The story is clumsy, the directing is okay, and the supporting performances are forgettable, but Denzel is superb. I feel weird saying a below average movie deserves an Academy Award, but the way Washington carries this film, he absolutely deserves the statue for Best Actor. Otherwise, there is no reason to watch this one.