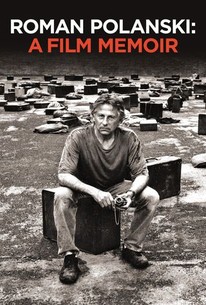 Famed director Roman Polanski discusses his remarkable, often controversial, life and career with his longtime associate Andrew Braunsberg in conversations filmed during a time when Polanski was under house arrest in Switzerland. He talks about his childhood during the holocaust, the tragic death of his first wife Sharon Tate, his ongoing legal battles, and many of his classic films including Chinatown, Rosemary's Baby, and The Pianist. ~ Perry Seibert, Rovi

[This doc] consists of the director's honest, contrite but always moving and thoughtful analysis of how fate channels the best and worst sides of our nature.

Roman Polanski: A Film Memoir is a rare opportunity to hear a master filmmaker speak about his life. Both his haters and fans will agree, it is a highly watchable documentary. But don't expect either group to feel they have heard the whole story.

Polanski sure knows how to spin a yarn, whether it's with words or film.

There's no doubt Polanski is a major artist, and his fans will probably get a lot out of his recollections, but don't expect any rigorous attention to the ethics of documentary-making. This is a personal exercise in public atonement.

An intimate and compelling, albeit sympathetic, portrait of this filmmaking legend, whose often tragedy tinged real life story eclipses his extraordinary onscreen work.

What rises to the surface and sparkles are Polanski's gifts as a raconteur, his fierce intelligence and his guile.

A fascinating, if workmanlike, insight into the life of a legend.

There is something exquisitely personal about this documentary in which he tells his story in conversation with his friend of over 40 years, producer Andrew Braunsberg

There are not many revelations in this docu of Polanski, but it's refreshing that it restores the balance between the director's background and incredibly creative career and the 1977 sex scandal that's dominated the media for decades.

Sycophancy is an ugly thing at the best of times, and when the subject is shouldering the story-telling burden without it, it's even worse.

There are no featured audience reviews yet. Click the link below to see what others say about Roman Polanski: A Film Memoir!