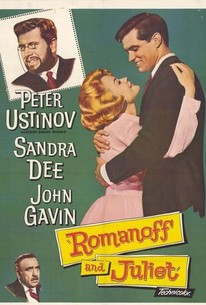 Peter Ustinov went the auteur route as writer, director, producer, and star of this Cold War farce, based on his play and very similar to the equally well-regarded The Mouse That Roared (1959). Ustinov is "the general," leader of the tiny European nation Concordia, which is so small that it does not appear on any maps, and each government employee holds two positions (the general's chauffeur is also ambassador to the U.S.). Despite its diminutive size, Concordia is a full-fledged member of the United Nations. A vote on an important measure is split evenly, with Concordia getting the deciding vote, so the general abstains and goes home, giving fits to the U.S. and U.S.S.R., Cold War rivals which are on opposing sides of the issue. A campaign of persuasion is launched to sway Concordia to one side or another, but the canny general wants to keep his country neutral, so he schemes to introduce the Russian ambassador's son Igor Romanoff (John Gavin) to Juliet Moulsworth (Sandra Dee), the daughter of the U.S. representative. Shakespearean-style romance between the two attractive young people inevitably ensues, much to the chagrin of their home countries and the general's delight. ~ Karl Williams, Rovi

Peter Ustinov
as The General

Tonio Selwart
as President of N

Renato Chiantoni
as Joseph the Pilot

Richard McNamara
as A General
View All

Critic Reviews for Romanoff and Juliet

It is saddening that Ustinov's exuberant fantasy has been kept so carefully in check.

There are several moments of quiet drollery but the satire is disappointingly thin and Ustinov's directorial pace is sluggish.

There are no featured reviews for Romanoff and Juliet at this time.