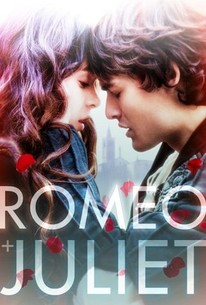 Romeo and Juliet, William Shakespeare's epic and searing tale of love, is revitalized on screen by writer Julian Fellowes (Downton Abbey) and director Carlos Carlei (The Flight of the Innocent). An ageless story from the world's most renowned author is reimagined for the 21st Century. This adaptation is told in the lush traditional setting it was written, but gives a new generation the chance to fall in love with the enduring legend. With an all-star cast including Hailee Steinfeld, Douglas Booth, Paul Giamatti and Stellan Skarsgaard, it affords those unfamiliar with the tale the chance to put faces to the two names they've undoubtedly heard innumerable times: Romeo and Juliet. Every generation deserves to discover this lasting love. (c) Relativity

Anton Alexander
as Abraham
View All

News & Interviews for Romeo and Juliet

View All Romeo and Juliet News

Critic Reviews for Romeo and Juliet

This Romeo and Juliet is set on its disappointing course, and it can't be deterred. What a bummer.

Carlei's film is beautiful but sterile, and seems nervous its audience will be bored to the extent that there seem to be more sword fights than usual. Only Paul Giamatti's touching turn as the Friar stays in the mind when this passionless film is over.

I know this thing's been kicking almost half a millennium, but is it too much to ask for a little invention?

"Romeo and Juliet" is too soapy and improbable to count among the Bard's very best plays, but it surely has some of his best dialogue, and messing it up this much is close to inexcusable.

I half expected Holly Hunter to turn up in a bonnet and throw herself speechlessly into the raging sea.

It has the look of someone sitting in front of the mirror painting themselves silly with all the finest cosmetic supplies while singing 'I feel pretty.'

With well over 150 adaptations and imaginations of what is perhaps Shakespeare's most famous, and definitely most adapted, work on screen, director Carlo Carlei's new Romeo & Juliet is, in a word, masterful.

The language is handled beautifully and the acting is solid; but, for lack of Shakespearian prose, this retelling just lacks umph.

The fact that this "love" is really little more than lust and rebellion is ignored by everyone involved - though at least the lust waits until marriage to be consummated.

There isn't an interesting new point of view here (unless it's that violence is bad and sometimes after a tragedy, you just have to mend fences and move on -- but that's hardly a new idea, and the story isn't meant to be beat-you-over-the-head didactic).

While the setting and the costumes are in keeping with the tale, you can't help but feel as if you are watching a grandiose stage production.

Audience Reviews for Romeo and Juliet

This is the latest British/Italian/Suiss adaptation of William Shakespeare's romantic tragedy of the same name directed by Carlo Carlei. Like Franco Zeffirelli's adaptation of Shakespeare's tragedy, this film uses the traditional setting of Renaissance Verona, but, unlike any of the previous major film adaptations only follows the plot and only uses some of Shakespeare's traditional dialogue. This has led to a controversy, with several critics denouncing the film's advertising as misleading, and losing the essence of the play. Maybe, but I really think this is the best version to attract the audience which never read or watched the play... especially any school children. We have Douglas Booth as Romeo Montague and Hailee Steinfeld as Juliet Capulet - both gorgeous young acting stars, and they did pretty good job. Many critics loudly complain about lack of passion, but I did not notice that at all! Even Damian Lewis as Lord Capulet, Kodi Smit-McPhee as Benvolio Montague, Ed Westwick as Tybalt and Paul Giamatti as Friar Laurence did a good job... actually, the last one did amazing job. Hailee Steinfeld was said to be in talks for the lead role as Juliet in this adaptation, but due to Steinfeld's young age, there was some concern she would be asked to appear nude in the film. Director Carlo Carlei explained "there was a lovemaking scene that included nudity for the married Romeo and Juliet. This script was written with a 20-year-old actress in mind. As soon as Hailee Steinfeld was cast, all nudity and lovemaking have been excised from the script. It will be romantic and age-appropriate for a 14-year-old." Julian Fellowes added, "We did feel it would be nice to have romantic, married love, and that purity was an important part of the film. They don't make love until they have been married." It was a different time, back then! Tony Howard, in his Around the Globe review writes that the film is "unique in its disrespect for the play, the actors, and young people". I really have no idea what is he talking about! It was an interesting film which managed to present the difficult play in the way which is closest to the understanding of the younger generation! Check it out!

An inadequate version of the Bard's love and death saga with a very disappointing Hailee Steinfeld mumbling her way through the sacred prose and performing the most awkward kissing scenes in quite awhile. Lesley Manville and Paul Giamatti are the lone standouts in this forgettable cast. (10-9-13)