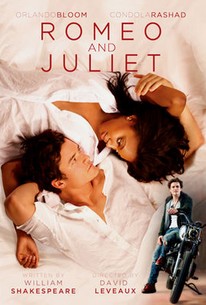 Romeo and Juliet perhaps the greatest love story of all time in its first Broadway staging in 36 years stars Orlando Bloom, who rose to fame in the Pirates of the Caribbean, Lord of the Rings and Hobbit films. Bloom makes his Broadway debut opposite the Tony nominated Condola Rashad (A Trip to Bountiful, Stick Fly). The stunningly modern stage production was directed on stage by five-time Tony nominee David Leveaux. The cinematic release is directed by Don Roy King. The acclaimed cast of 25 includes Tony Award winners Brent Carver (Kiss of the Spider Women), Chuck Cooper (The Life), two-time nominee Jayne Houdyshell (Follies) and Christian Camargo (Twilight: Breaking Dawn Parts 1 and 2).

Directed by David Leveaux, this film of the stage show is clunky, with sudden close-ups that seem out of place.

Shakespeare wrote Juliet as 13, Romeo a little older. But surely not as old as Orlando Bloom, 36, when he made his Broadway debut in the role last year?

The thoughtful translation from the Broadway boards to the cinema screen and well-chosen leads makes this for a better than average adaptation.

The lovers' first scene together is moving, while performances by Jayne Houdyshell (the nurse) and Christian Camargo (Mercutio) growl with intelligence.

Competent rather than vivid or compelling.

OK, it's not Baz Luhrmann-inventive, but Bloom's playful Romeo and Condola Rashad's sweetly virginal Juliet are beautiful to watch.

The director does a good job finding the shallow notes of youth and fleshing some humour from these old bones, but the burning love nut never gets roasted to perfection.

There are no featured reviews for Romeo And Juliet (Broadway Hd) at this time.