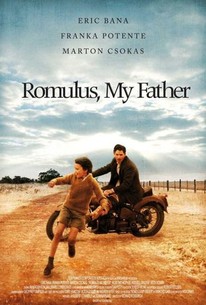 Longtime Australian actor Richard Roxburgh makes his directorial debut with this adaptation of Raimond Gaita's acclaimed memoir, adapted for the screen by poet Nick Drake and starring Eric Bana, Franka Potente, and Kodi Smit-McPhee. Despite their hardships in life, Romulus (Bana) and his beautiful wife, Christina (Potente), struggle to raise their son, Raimond (Smit-McPhee), to the best of their abilities. As the deeply moral Romulus struggles to make up for the absence and neglect of the boy's depressive mother, father and son build an unbreakable bond that is only strengthened with the passing of time. ~ Jason Buchanan, Rovi

News & Interviews for Romulus, My Father

View All Romulus, My Father News

Critic Reviews for Romulus, My Father

For all its sad moments, Romulus, My Father is a love story between father and son kept aloft by unalloyed admiration.

For all that it's well made and expertly acted, the film keeps its audience at arm's length, letting viewers observe without offering an emotional portal of entrance.

It's not clear what we're supposed to take away from the film.

The darkness of the story is counterbalanced by some of the most radiantly beautiful cinematography I've seen in a long time.

Romulus, My Father is a stacked deck determined to make you feel bad, but it rarely makes you feel anything else.

Builds up an emotional head of steam that draws audiences towards it.

The picture has a tranquil, gentle nature about it that's almost soothing, while offering examples of familial terror Roxburgh processes superbly...there's much to admire.

Gaita clearly had a rough childhood, but while the tragedies of his young life pile up on screen the drama remains frustratingly inert.

A beautiful mediation on the struggle of immigrants in Australia and the power of the father-son bond.

It's fitting perhaps that a film based on Rai Gaita's memoirs should play rather like a string of memories; we don't remember the past in a linear story but as patches, chapters, moments, sometimes merely fractions of their entirety.

Audience Reviews for Romulus, My Father

Very moving, and there just never seems to be a dull moment. This is supposed to be a true story, also, which amazes me. At the end it tells you that the boy in the story grew up and did well in his life. Sheesh. If he can, anyone can because this family (this boy especially) went through one horrible time after another. Eric Bana did a wonderful job playing the father. I have never paid much attention to him before, but now I have seen a side of his acting that leaves me at awe. Really great movie.

Here's an interesting movie that follows the life of Romulus and his family. As he deals with daily life, he realizes that his family is falling apart and his wife is on the verge of leaving him and all that is dear to him is his son. Eric Bana and Franka Potente stars. Worth seeing.

A nice movie, but a little slow for me.

Excellent, magnificent and emotional true story of the author Raimond Gaita's childhood of impossible love that celebrates the unbreakable bond between father and son. Eric Bana makes an astonishing performance as Raimond's father, Romulus, and for Richard Roxburgh in his directing debut.