Ron and Laura Take Back America2016 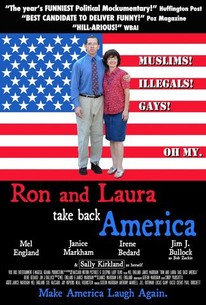 In the mockumentary, Ron and Laura Grawsill are taking America back! But, when they decide to film their protests against Obamacare and Gay Marriage, the "culture wars" land right in their own backyard. Their son is Gay! The housekeeper's illegal! Muslim Americans! African Americans! In the final showdown, Ron and Laura lose their health insurance, and take the battle to their favorite reality star, America's Top Celebrity Designer, Bob Zackie!

Sally Kirkland
as Herself

Barack Obama
as Himself

Sandy Fury
as Manager
View All

Critic Reviews for Ron and Laura Take Back America

Aiming for but failing to achieve a Christopher Guest level of spoofery, Ron and Laura Take Back America lives up to George S. Kaufman's quip that satire is what closes on Saturday night.

There's only one joke here - GOP voters are bigoted, Stars and Stripes-wearing clowns - and it's handled with the sort of blunt, bludgeoning mean-spiritedness that it slams them for peddling.

Broad and silly, it makes some very strong points on a variety of topics. So it's smart and important, even if it feels like a Saturday Night Live sketch that goes on for 90 minutes.

Rich Cline
Shadows on the Wall
View All Critic Reviews (3)

Audience Reviews for Ron and Laura Take Back America

There are no featured audience reviews yet. Click the link below to see what others say about Ron and Laura Take Back America!