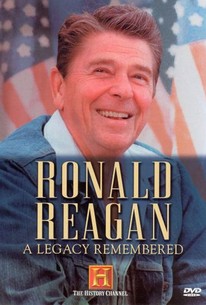 For this up-close-and-personal TV documentary, former CNN Washington bureau chief Frank Cesno was given unprecedented access to the memories of those people whose lives were profoundly touched by former President Ronald Reagan: family members, friends, political colleagues, advisors, fellow world leaders, employees. Bypassing Reagan's Hollywood career and controversial tenure as head of the Screen Actors Guild, the two-hour film focuses on his political career, and the events in his childhood and early adulthood that helped shape his vision and character. Impeccably unbiased, the film explores both the highs and lows of the Reagan administration, giving equal time to his adherents and detractors. Among the fascinating revelations herein are former Soviet premiere Gorbachev's affirmation that no one but Reagan could have successfully brokered the US-USSR peace summits, and the observation by son Ron Reagan that his father, though affable and outgoing, always held back "that last ten percent", refusing to allow anyone to get truly close to him. This evenly balanced film will confirm Reagan's greatness to his supporters, and reiterate the man's shortcomings to his non-supporters; even decades after the Reagan regime, there is no middle ground so far as his friends and foes are concerned.

There are no critic reviews yet for Ronald Reagan: A Legacy Remembered. Keep checking Rotten Tomatoes for updates!

There are no featured reviews for Ronald Reagan: A Legacy Remembered at this time.