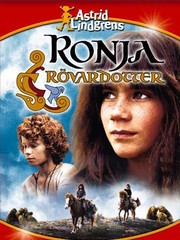 Tamara K
½ July 4, 2011
Childhood memories! Loved the book. Nice movie, just sweet and kind. Beautiful scenery, and too great that it is in Swedish. :-)

Pauline L
July 13, 2010
'Ronja: The Robber's Daughter' remains as one of my favourite childhood stories. Seen the film twice and all I can say is that the magic still remains. The characters are lovable and the acting decent. It's a perfect family movie, because there's enough excitement to keep the more mature audience interested and the younger ones on the edge of their seats.

Super Reviewer
Martin D
April 18, 2010
This is very good..it takes me back to my childhood..based on a great book of Astrid Lindgren.
High up on a rock, in the middle of a large forest, there is a stronghold. In that stronghold lives a band of robbers, who robs the innocent people who travels through the forest. Mattis is their leader. One night there is a terrible thunderstorm. A great lightning strikes the rock and makes a wide crack which divides the rock and the stronghold into two. The same, during the thunderstorm, two children are born. One is a girl - the daughter of Mattis and the other is a boy - the son of Borka. Borka now becomes the leader of the other part of the stronghold. From that day, there are two bands and they are the worst of enemies. It looks like nothing can bring them together again. But there are two things that can overcome all obstacles - love and friendship. The two children grow older, older each in their part of the strong- hold, till one day, they are old enough to go out in the forest on their own and take care of themselves, like the band's children have done in all times. And that will not be easy. There are many strange and dangerous creatures in the forest but also fantastic adventures... and friends.

Sofia B
January 31, 2010
This is another childhood favourite of mine, and after watching it again it's still no wonder that I wanted to be just like this girl. And have a lasting fascination for the Middle Ages.

Alf L
½ January 16, 2010
It's a swedish classic, this one brings back memories from my childhood.

Super Reviewer
Jani H
August 9, 2009
I grew up reading Astrid Lindgren's books. Of course I also spent some time with some more international writers but at that time 'Pippi Longstocking', 'Emil' and 'Mio in the Land of Faraway' seemed a bit more interesting for a young boy from Scandinavia.

'Ronja: The Robber's Daughter' remains as one of my favourite childhood events. I've read the book and seen the film several times. After a long pause, I watched it again and all I can say is that the magic still remains.

First of all, this is not a film only for children but a perfect movie for the whole family. 'Ronja' has something for everyone; imaginative creatures for those fantasy fanatics, beautiful nature images for all wanderers and, most importantly, a story that will effect each and everyone.

The main characters in the film, a daughter and son from rival gangs, are 11 year old kids who seek for adventure and end up finding a strong friendship. I could easily relate to the kids cause I had similar thoughts when I grew up. I've lived far away from big cities, near the wild, when growing up. This is what we did! Played in the forrest, enjoyed the fresh air etc. Something that many kids nowadays aren't doing... But all kids, no matter what generation they're from, have something in common... Parents can be a pain in the ass!

'Ronja' also features one of my favourite creatures ever seen on film. These creatures are called "Rumpnisse". I'm not sure if there's a translation for this word but everytime I saw them, my mouth couldn't stop smiling!

'Ronja' is, as said before, a perfect family movie. There's enough excitement to keep the more mature audience interested and the younger ones on the edge of their seats. There's very little violence and when there's fight scenes going on, they tend to go more on the funnier side. And one thing I have to mention is the songs! Very enjoyable!

The characters are lovable and the acting decent. As a curiosity, Hanna Zetterberg who plays Ronja, never continued her career after this film. 'Ronja' remains as my favourite Astrid Lindgren story and is highly recommended to all who want to see a movie that concentrates on the characters and the story instead of special effects and big budgets.

Robin A
½ February 4, 2009
Classic and a film every kid in Sweden should see and I think they do.

Leena R
½ December 3, 2008
An excellent movie in the spirit of the book. You should see this if only for those spectacular wildlife shots!

Super Reviewer
a z
October 20, 2008
Yet another book my father read for me. I even saw a stageplay of it also.

Marina N
½ September 6, 2008
An excellent movie (and an excellent book, of course!) with beautiful cinematography. Some scenes are more than a tad cheesy (it is, after all, based on a so called children's book) and therefore painful to watch, but otherwise... it is simply a great story, very well directed, well acted (overall), and beautifully made. One of my childhood's favorites that I do not mind seeing again as an adult.
Page 1 of 6