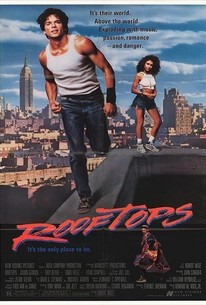 In his last feature film, veteran filmmaker Robert Wise directs Rooftops, an '80s dance-filled melodrama featuring a similar plot as his 1961 Oscar-winning musical classic West Side Story. A white boy named T (Jason Gedrick) lives in a largely black and Hispanic neighborhood built on the top of old buildings. He and his friends engage in a streetfighting dance competition called "Combat," which is supposedly based on the dance style of "Capoeira," originally developed by slaves in Brazil. He falls in love with Elana (Troy Beyer), who is the cousin of his major enemy, drug dealer Lobo (Eddie Ve'lez). Conclusion involves a big fight/dance sequence between T's neighborhood and the drug dealers.

Angelo Florio
as Cop at Dance

It's cliche-ridden, poorly acted and, worst of all, indifferently danced.

The biggest letdown is the paucity of dance sequences that could have vaulted Rooftops into memorability.

"Rooftops" is a film you think you know soon after it begins, and you're right.

It's B-grade teen saga stuff, but in the hands of an old pro like Wise, Rooftops is fairly watchable.

Wise's return to the 'street-sussed musical' is painfully disappointing: a parade of frantic, vacuous gestures which, like combat dancing itself, simply never delivers the punch...

The biggest problem with "Rooftops" is that it can't decide whether to be a light dance fantasy or a heavy-handed thriller.

Wise ought to be ashamed. But chances are that if he were capable of directing the vulgar and badly made "Rooftops," shame is beyond him by now.

It's never possible to enjoy any part of "Rooftops"...

It's tempting to write that Gedrick is no Richard Beymer, but strictly speaking, that's not true -- Gedrick has about as much charisma as Beymer, which is no charisma at all.

The thing is, none of this is very interesting or exciting. The music is the sort of annoying, undistinguished, monotonous drumbeat you can hear out of any passing boombox. The dance sequences are perfunctorily shot.

There are no featured reviews for Rooftops at this time.