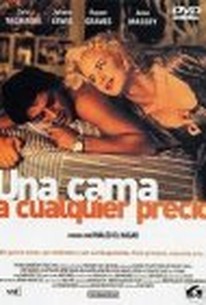 One man's pursuit of life, liberty, and a green card sets the stage for this comedy-drama. Ali (Said Taghmaoui) was born in Egypt but has come to England in hopes of finding his fortune. Nothing if not industrious, Ali juggles several low-paying jobs: He works in a Middle Eastern restaurant, writes screenplays, helps redub Arabic-language movies into English, and gives belly dancing lessons. In the grand tradition of dance instructors, Ali is also having an affair with one of his students, Vivienne (Clementine Celarie), a middle-aged art dealer who refuses to take no for an answer. Ali is kicked out of his rooming house after several of his neighbor's sexual peccadilloes pop up in one of his scripts, and to add insult to injury, Ali is informed that his visa is about to run out and may not be extended. Needing a place to stay, Ali accepts an offer from Mark (Rupert Graves), a photographer who will give him a room and some cash in exchange for posing for photos to be used in a gay-themed magazine. Wanting to stay in England, Ali's less than scrupulous friend Ahmed (Karim Belkhadra) says he can arrange a marriage with a British citizen that would help him gain citizenship, but the price is 5,000 pounds, more than Ali can afford. Ali soon meets Linda (Juliette Lewis), an American expatriate who does a nightclub act as Marilyn Monroe; Linda likes Ali, and is willing to marry him for a mere 3,000 pounds, though Ali still has no idea how to come up with the money. Room to Rent was the first feature from writer/director Khaled Al Haggar, who is himself an Egyptian immigrant living and working in London. ~ Mark Deming, Rovi

There are no critic reviews yet for Room to Rent (Una cama a cualquier precio). Keep checking Rotten Tomatoes for updates!

There are no featured reviews for Room to Rent (Una cama a cualquier precio) at this time.