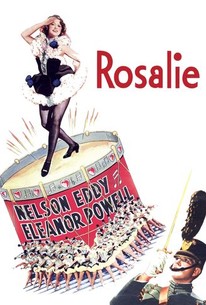 More burdened with leaden production numbers than plot, Rosalie took Sigmund Romberg and George Gershwin's 1928 Broadway hit, threw out most of the songs, including "How Long Has This Been Going On?," but retained the spindly story of the incognito Princess Rosalie of Romanza (Eleanor Powell), who falls head-over-heels in love with All-American Dick Thorpe (Nelson Eddy), although she finds him conceited at first. But Dick gallantly flies to Romanza where the crooning Charles Lindbergh lands in the middle of yet another comic opera revolution. Rosalie, of course, is engaged to someone else, but after a series of misadventures and a colossal closing number, the star-crossed lovers decide to settle down together in democratic America. Cole Porter was hired to write a new score and Eleanor Powell, Nelson Eddy, and newcomer Ilona Massey perform "I've Got a Strange New Rhythm in My Heart," "Why Should I Care?," "Spring Love is in the Air," "It's all Over but the Shouting," "Who Knows?," "To Love and Not to Love," and, most memorably, "In the Still of the Night." ~ Hans J. Wollstein, Rovi

Edna May Oliver
as Queen

Pierre Watkin
as Supt. of Academy

Ocean Claypool
as Lady in Waiting

Kay Aldridge
as Lady in Waiting

Sidney Bracey
as Conspirator
View All

Rosalie could have got by just on its talent, but it has thrown in a million dollar's worth of production, with the result that it's as big as all outdoors and looks a lot more expensive.

Some nice songs and lavish production numbers with Eleanor dancing like a dervish. Both Frank Morgan and Edna May Oliver are very amusing but that block of wood Nelson Eddy in the lead brings the whole thing to a grinding halt whenever he's on screen. Truly the man is so stiff you would think his head would break off if he turns it too fast!

It's predictable and there are some annoying songs, but it has some charm, and the actors are okay. Overall an alright movie.