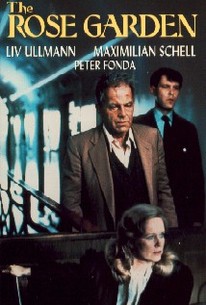 The US/German co-production The Rose Garden is based on an actual court case. Cast against type, Maximillian Schell plays a shabby old man who, without warning, attacks well-to-do Kurt Hubner at the Frankfurt airport. Hubner presses charges, and it looks like an open-and-shut case. But public-defender Liv Ullmann, who has witnessed the incident, is urged by her daughter to defend the poverty-stricken Schell in court. During her investigation, Ullman learns that Schell is a concentration-camp survivor who lost his sister to a hideous Nazi medical experiment, and that Hubner was commandant at the camp where this and other atrocities occurred. Hubner has been able to legally maneuver his way out of Germany, and was en route to parts unknown when Schell recognized him and attacked him. Even though she is armed with this information, Ullmann cannot be certain that justice will be served to the correct man. The Rose Garden is a provocative, compelling piece, deliberately and methodically raising more questions than can possibly be answered within its 112 minute running time.

Critic Reviews for The Rose Garden

There are no critic reviews yet for The Rose Garden. Keep checking Rotten Tomatoes for updates!

There are no featured reviews for The Rose Garden at this time.