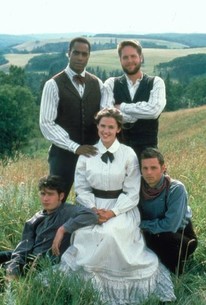 This made-for-TV drama, produced for the acclaimed anthology series Hallmark Hall of Fame, follows four orphans journeying from New York to the American West during the great migration of the 19th century. En route, the four boys find an abandoned baby, whom they adopt and raise as their own. As the girl, whom they name Mary Rose (Jennifer Garner), grows up, she begins to chafe under the authority of Adam (Jeffrey D. Sams), Douglas (Zak Orth), Travis (Tristan Tait), and Cole (Justin Chambers), who are at once brothers and surrogate parents to her. The conflicts come to a head and Mary decides to go to New York, in hopes of finding the parents who gave her up years before. Rose Hill was adapted from the novel For the Roses by Julie Garwood.

Kevin Zegers
as Cole Clayborne at 13

There are no critic reviews yet for Rose Hill. Keep checking Rotten Tomatoes for updates!

There are no featured audience reviews yet. Click the link below to see what others say about Rose Hill!