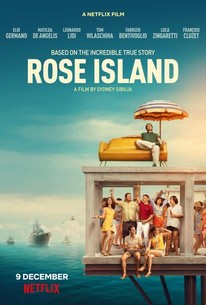 Giorgio, a gifted yet misunderstood engineer has hit rock bottom -- he's been fired from his job, his parents won't speak to him, and the love of his life has ditched him after he accidentally gets them both arrested (long story...). Sick of the stuffy rules of Italian society of the late 60s, Giorgio hatches an impossible plan; he will build his own island in the middle of the sea. Joined by a team of revolutionaries and outcasts, the Republic of Rose Island is founded, independence is declared and Giorgio is appointed President. However, team values and resilience are tested, as the Italian Prime Minister decides Giorgio's idealistic island is Italy's Enemy Number One.

Ascanio Balbo
as Other cast:Carlo

Christian Stamm
as The reporter

Sibilia and co-writer Francesca Manieri successfully mix whimsy and pathos to give us something truly inspiring.

You wait for anything much to happen.

Entertaining adaptation of an anarchistic story that deserves to be better known.

A kind of Italian Fitzcarraldo, Rose Island persuasively argues that dreamers can move mountains. It offers little in the way of surprises, but it's hard not to be won over by its small-scale delights.

The film's account (with Elio Germano as Rosa) certainly doesn't stake out new territory, but its tale of mavericks pursuing their dream and defying stuffy politicians is lively enough.

A granddaddy of a wasted opportunity.

This isn't all that, but what's here is cute and perfectly watchable.

It's a classic underdog story that insists, and in some ways proves, that all you really need in life is the will to make a difference and the stubbornness to not be told no.

There are no featured reviews for Rose Island at this time.