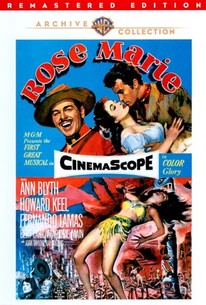 1954's Rose Marie is the third film version of the 1924 Otto Harbach-Oscar Hammerstein-Rudolph Frinl operetta of the same name. Though not a completely faithful adaptation, this version is closer to the original than the (admittedly enjoyable) Nelson Eddy-Jeanette MacDonald version of 1936. Ann Blyth stars as Rose Marie Lemaitre, a hoydenish French-Canadian lass who is "tamed" by cheerful mountie Mike Malone (Howard Keel). At first, Mike is only interested in using Rose Marie to capture her sweetheart, renegade trapper Duval (Fernando Lamas), but eventually he falls in love with her, and she with him. Counterpointing the romantic main plot are the comic antics of Bert Lahr, who elucidates his sorry lot in life with the song "I'm the Mountie Who Never Gets His Man." The original Rudy Friml score is well in evidence, along with several new Friml compositions and a few extra tunes penned by Georgie Stoll and Herbert Baker. There's also a remarkable "Indian sacrifice" production number spotlighting a young Rita Moreno. Original Cinemascope prints of Rose Marie included a nine-minute prologue, wherein conductor Alfred Wallenstein led the MGM orchestra in a rendition of "Poet and Peasant Overture" (this was evidently inspired by the similar symphonic prologue which opened 20th Century Fox's How to Marry a Millionaire).

There are no critic reviews yet for Rose Marie. Keep checking Rotten Tomatoes for updates!

There are no featured audience reviews yet. Click the link below to see what others say about Rose Marie!