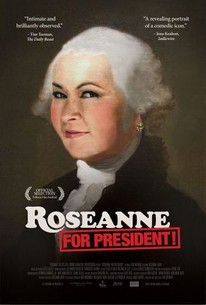 Follow comedy legend Roseanne Barr as she embarks on a wild, hilarious, and impassioned campaign for the highest office in the land. It's 2012 and Barr, fed up with corporate influence in politics, takes matters into her own hands when she launches a third party presidential bid founded on grassroots activism. Hitting the campaign trail, the sarcastic, opinionated, and outspoken Barr makes for a candidate unlike any other as she brings her message to the people. Featuring appearances from Michael Moore, Sandra Bernhard, Rosie O'Donnell, and others close to Barr, Roseanne for President! is both a rousing David vs. Goliath tale and a revealing portrait of a cultural icon.

Critic Reviews for Roseanne for President!

The depths of Barr's character are left unplumbed, while other media personalities like Michael Moore and Rosie O'Donnell gush about her cultural impact.

There really isn't much of a campaign to document - Barr, who says she doesn't like shaking hands and meeting people, mostly Skypes from her Hawaii home - and it's hard to tell exactly what to make of it all.

Told with intimacy and candor and a no holds barred approach, 'Roseanne for President!' is a winner.

Weinrib does a solid job following every twist in the campaign trail, but the heart of Roseanne For President! is in the quiet moments with Barr at home.

Roseanne for President! too often crosses that uneasy line between laughing-with and laughing-at.

As invigorating, profane and downright honest as the subject herself, this doc follows an iconic performer on her dubious, rather divine, campaign trail.

It will likely stoke curiosity among those who followed (or weren't aware of) Barr's candidacy, but its flippant approach makes it more of a specialty item for fans than a heavyweight issue doc.

Audience Reviews for Roseanne for President!

There are no featured audience reviews yet. Click the link below to see what others say about Roseanne for President!!