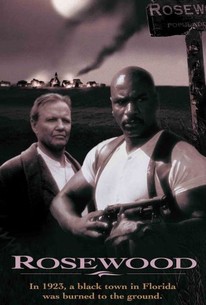 Critics Consensus: In some respects, Rosewood struggles to present a full picture of the real-life tragedy it dramatizes, but it remains a harrowing depiction of racial violence.

Critics Consensus: In some respects, Rosewood struggles to present a full picture of the real-life tragedy it dramatizes, but it remains a harrowing depiction of racial violence.

Critic Consensus: In some respects, Rosewood struggles to present a full picture of the real-life tragedy it dramatizes, but it remains a harrowing depiction of racial violence.

In early January 1923, a tiny Florida town primarily inhabited by prosperous African American families was burned to the ground by angry whites from a neighboring town. Neither the perpetrators nor the victims spoke of the incident. However, in 1983 a reporter stumbled across the old story and began investigating.

Singleton's main goal is the vivid re-creation of mob violence, and he achieves it expertly.

Singleton's boldness is invigorating _ and merciless.

Harrowing this may be, but the concessions to commercialism rob it of much of its genuine power.

Singleton brings the images and underlying psychological truths of American racial violence to the screen with a brute dramatic force that few directors have matched.

At its best, Rosewood touches a still-raw nerve.

Rhames' gravity and grace, Voight's pinched anguish as he wills himself to do right, the moving work of actors like Don Cheadle and Esther Rolle do much to redeem this film for human if not historical reality.

Undoubtedly a great movie could have been made of this still unhealed scab on the body politic. But "Rosewood," John Singleton's film of these events, isn't it.

The fact that Rosewood takes time to understand its demons is an uncommon touch for any film that addresses such an inflammatory topic.

A unique and shining example of telling the stories of our past that need to be told, lest their lessons be lost forever.

America has not truly dealt with the race massacres that happened far too often early in the 20th century, and this filmmaker, aware of that, did his part to raise awareness.

The intentions are unassailable: to dramatize a forgotten injustice and sear it into contemporary memory so it's never allowed to happen again. But the movie is long and didactic, undermined by the faintly pious air of an educational slide show.

To this day racism is a heated and frequently-discussed topic, even though the term has come to mean something entirely different today than it did back then. John Singleton's "Rosewood" is yet another film that shows us the cruel acts of violence that the black community endured in the past, fueling the hatred for bigotry even more. A lot of the brutality that occurs onscreen is hard to stomach, not because it is graphic or bloody in nature (though it sometimes is), but because it is unreasonable, uncalled for, and unjustified. The white landowners who engage in the murdering and lynching of blacks have no real reason to do what they're doing. They don't see the harm in killing a black person, have no real evidence for doing so, and in the end, do not pay for their crimes. Nothing in the form of punishment ever comes their way. Life continues for them like nothing happened. Yet "Rosewood" is somehow cathartic and ends on a slightly positive note. Hell, it sort of needs to. Films like this need a happy ending, no matter how unrealistic it is. We need to feel like everything is okay, even though something like the Rosewood massacre happened. That's the magic of cinema.

Look! as mobs of scary southerners hang black people for no reason. Watch! as Jon Voight shows his scary old man butt. See! as Ving Rhames kicks craker ass and un-hangs himself with his ridiculously strong body. Whitness! as Don Cheadle shamelessly decoys himself with a retarded kid who gets burned and riddled with bullets. Experience! aunt Jemimah tell stories of the old slave days. All this and more in Rosewood.