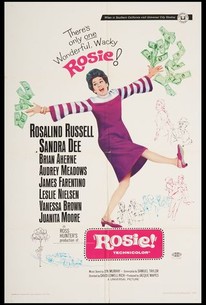 Rosie! is directly based upon Ruth Gordon's play A Very Rich Woman, which was itself based upon a French play by Philippe Heriat, but the indirect source for all three versions is Shakespeare's King Lear. Rosalind Russell has the Lear part, here transformed from a powerful king into a rich, madcap grandmother by the name of Rosie Lord. Unlike in Shakespeare, however, Rosie does not abandon her wealth voluntarily; instead, her viperish children make an assault on her in an attempt to claim their inheritance while Rosie is still alive. They succeed in getting her declared mentally incompetent and thrown into a grotesque asylum, an experience that is so traumatic that she nearly does go insane. Fortunately, Rosie's beloved granddaughter Daphne (Sandra Dee) is appalled at what has happened; she moves into high gear, contacting an ex-lover of Rosie's (played by Brian Aherne) who also happens to be a powerful and skilled attorney. A lengthy court battle ensues, with both sides determined to come out triumphant. ~ Craig Butler, Rovi

Than Wyenn
as Psychiatrist

Kathleen O'Malley
as Secretary
View All

This is not comedy but satire, and an interesting development from Hollywood. It is also, by the way, excellent entertainment for the holidays: a family film of interest to adults, too, not just to 6-year-olds.

There are no featured reviews for Rosie! at this time.