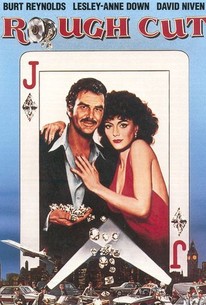 Notorious international jewel thief Jack Rhodes (Burt Reynolds) is out to steal $30 million in uncut diamonds in this visually opulent, uneven comedy. Chief Inspector Cyril Willis (David Niven) is Rhodes' nemesis. He wants to retire from Scotland Yard but would like to capture Rhodes as a final, dramatic cap to his career. In order to achieve his ambition, he sets up lissome Gillian Bromley (Lesley-Anne Down) as Rhodes' erstwhile partner in crime. The unpredictable happens when Rhodes and Bromley fall for each other, leaving the best-laid plans open to unexpected amendments. Three different directors had a hand in this film though their imprints are remarkably homogenous up to but not including the ending.

Lesley-Anne Down
as Gillian Bromley

Brian Tipping
as Waiter at Pub

Carol Rydall
as Hooker in Window
View All

The key to caper films is to stay one step ahead of the viewer. Each twist should be surprisingly logical. But the twists in Rough Cut come with a map and a tour guide. You know exactly where you're going before you get there.

It's fun, it's slick and it's carefully put together, but it's more of an exercise than an accomplishment.

The movie cannot overcome the tone of a childish comic book. [Full Review in Spanish]

Rough Cut is a Burt Reynolds movie I've never heard of & after watching it I can see why, It was terrible.I think I lost interest in the 1st 20 minutes of this movie & it's weird cause I usually either like Burt's movies or can at least watch them