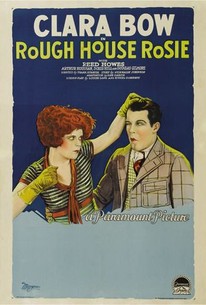 "Rough House Rosie" Reilly (Clara Bow) just can't seem to stay out of trouble. Hoping to become a Broadway actress, Rosie gets mixed up with rowdies and ends up in jail. Much the same thing happens when she tries to crash High Society. Eventually, Rosie finds her true niche in life when she falls in love with handsome prizefighter Joe Hennessey (Reed Howes) and helps him to win the championship bout by using her goo-goo eyes to distract his opponent. Arthur Houseman, later one of screendom's favorite "comic drunks," plays a comparatively straight role as gambler Kid Farrell, while Joseph W. Girard, perennial police chief in many a talkie serial, goes through his usual paces here. ~ Hal Erickson, Rovi

It is polished up smartly and the performances of the principals in the various comic sequences are always diverting.

It would be difficult to point to a single original feature in Rough-House Rosie.

Clara Bow seems to be winning in the race of flappers.

It's a time-worn story with scarcely a spark of originality in it.

Rough House Rosie should have been a better picture than it is.

Rough House Rosie is not high art, but it is excellent entertainment.

The story is just as hard as the title, but, through the vivacious personality of Clara Bow, it develops into being one of the most enjoyable pictures of the month.

In spite of such a hackneyed frame the picture is attractive. In fact, the frame seldom matters much when Clara Bow is letting off her gymnastic and emotional fireworks.

Rosie's adventures in her attempt to land into society afford plenty of good laughs.

The story is thrilling and romantic, telling of simple folk and the reaction on them of altered circumstances.

There are no featured reviews for Rough House Rosie at this time.