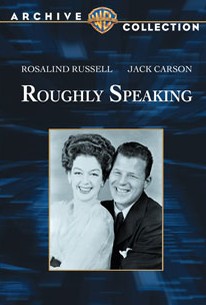 This odd combination of roughneck comedy and serious domestic drama was adapted by Louise Randall Pierson from her own autobiographical novel. Rosalind Russell is cast as young Louise Randall, the headstrong daughter of a New England merchant. Inheriting her father's business, Louise intends to persevere in a "man's world," and to that ends takes business courses at Yale. Here she meets and marries banker's son Rodney Crane (Donald Woods), with whom she has four children. When wishy-washy Rodney runs off with another woman, Louise marries a second time to irresponsible but likable gambler Harold Pierson (Jack Carson) -- and gets pregnant again. Though Louise and Harold are as different as night and day, theirs is a lasting union, which remains solid despite whatever misfortunes come their way. The story ends at the outbreak of WW II, with Louise and Rodney bidding a tearful but hopeful goodbye to their three grown sons as the boys prepare to enter military service.

Ann E. Todd
as Louise Randall as a child

Helene Thimig
as Olga the Maid

Greta Granstedt
as Anna the Maid

Hobart Cavanaugh
as The Teacher

Eily Malyon
as The Dean

George Carleton
as The Judge

Chester Clute
as The Proprietor

Jo Gilbert
as Woman in Store

Jody Gilbert
as Woman in Store

George Meader
as The Professor

The whole thing depresses me beyond words. Jack Carson, however, is likable, as he always is.

Wow, Jack Carson in a starring role. He should have had more chances. He's excellent here, although he really only appears for the second half of the film. He and Russell have great chemistry.

You can tell we're dealing with Hollywood-izing of the story, however. As a biopic based on the life story of Louise Randall Pierson, you know that the hard times are glossed over pretty smoothly. Polio, abandonment by divorce, and multiple bankruptcies are hardly ever this lightly overcome in the "real" world. Still, highly recommended for all you Carson and/or Russell fans.