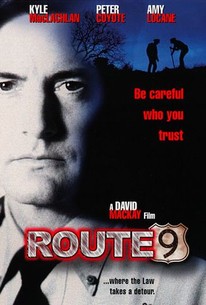 Two lawmen find the call of corruption too loud to ignore in the drama Route 9. Booth Parker (Kyle MacLachlan) and Earl Whitney (Wade Williams) are two deputies in a small town who discover a crime scene along a deserted highway. There appears to have been a shoot-out with no living witnesses, and left in the dust by the side of the road are a van filled with illegal drugs and $1 million in cash. Booth and Earl are too weak to resist the urge to take the money, but when a federal agent (Roma Maffia) arrives to look into the case, they soon discover there's more to the crime than they originally expected. The knots become even more tangled when another sheriff (Peter Coyote), whose wife has been sleeping with Booth, starts sticking his nose into the case.

Carlos Cervantes
as Gunman in Bronco

Joel Stoffer
as Anthony
View All

There are no critic reviews yet for Route 9. Keep checking Rotten Tomatoes for updates!

There are no featured audience reviews yet. Click the link below to see what others say about Route 9!