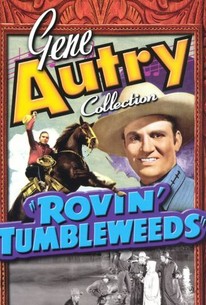 The Gene Autry western Rovin' Tumbleweeds has much in common with the previous Roy Rogers vehicle Wall Street Cowboy. Both films concern an honest cowpoke who comes to the Big City and flummoxes the crooked slickers therein. In the Autry film, the hero arrives in Washington (a la "Mr. Smith"), hoping to secure government aid for his flood-plagued constituents. The villain of the piece is political boss Holloway (Douglass Dumbrille), who holds up a flood-control bill so that he can foreclose on the washed-out farmers and thus line his own pockets. Most of the requisite musical numbers are staged in a jerry-built rustic radio station, where Autry and announcer Mary Carlisle are the only staff members.

Horace B. Carpenter
as Radio Listener

Forrest Taylor
as Casey - a Migrant

Tom Chatterton
as Speaker of the House

Chuck Morrison
as Man at Packing Plant
View All

There are no critic reviews yet for Rovin' Tumbleweeds. Keep checking Rotten Tomatoes for updates!

There are no featured audience reviews yet. Click the link below to see what others say about Rovin' Tumbleweeds!