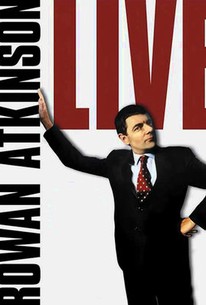 Odd-mannered English comedian Rowan Atkinson -- a man known for creating colorful characters such as Edmund Blackadder and Mr. Bean -- entertains a live audience in Boston in this 1991 stand-up performance that showcases his love of the absurd. Extras include three hilarious bonus sketches that were also taken from the live show: "Elementary Dating," "Guys After the Game" and "Tom, Dick and Harry."

There are no critic reviews yet for Rowan Atkinson Live!. Keep checking Rotten Tomatoes for updates!

Man, its a good thing this wasn't my introduction to Atkinson. I probably would never have bothered to check out his movies. A sketch comedian he is not.