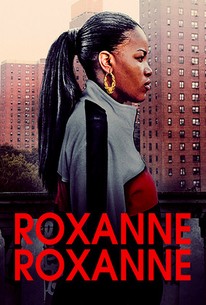 Critics Consensus: Roxanne Roxanne belatedly honors its subject with a gripping character-driven biopic that serves as a primer for a trailblazing career while telling an often tragic story.

Critics Consensus: Roxanne Roxanne belatedly honors its subject with a gripping character-driven biopic that serves as a primer for a trailblazing career while telling an often tragic story.

Critic Consensus: Roxanne Roxanne belatedly honors its subject with a gripping character-driven biopic that serves as a primer for a trailblazing career while telling an often tragic story.

In the early 1980s, the most feared battle MC in Queens, New York, was a fierce teenage girl with the weight of the world on her shoulders. At the age of 14, Lolita "Roxanne Shanté" Gooden was well on her way to becoming a hip-hop legend as she hustled to provide for her family while defending herself from the dangers of the streets of the Queensbridge Projects in NYC.

Left as a footnote in music and hip hop history, when the film is at its best, it's a mold breaking biopic for its subject. At its worst, it's as unfocused as the teenage mind it inhabits.

Larnell gathers a wide cast of vital actors for a bustling series of incidents that veer quickly from the sentimental to the shattering.

Adams is able to bring Shanté to life, but "Roxanne Roxanne" is so focused on personal details that the bigger picture is rendered blurry.

A film that breaks the musical biopic mold in ways that are sometimes frustrating and frequently exhilarating.

Don't worry: There will be rap battles and concert scenes and they do not disappoint. But they are the bass line beat. The drama of ordinary life is what makes this story stick in your head.

One presumes that Michael Lerner's sense of emphasis is meant to humanize Shanté, defining her apart from the fame she achieved, but this stratagem backfires as Roxanne Roxanne mires itself in scenes of speechifying domestic strife.

This movie is well acted, but it does seem to operate on a single, rather depressing note throughout. It would have helped if there was more of an emotional story arc to it. It ends not far emotionally from where it starts.

Nia Long has her fiercest role in ages and gives her best performance in years in this gritty tale of love and hip hop.

I was devastated about what a waste of phenomenal talent this movie [is]... It was basic, and it was lazy writing.

Gets a difficult job done right: telling a Black woman's story on the screen. It tells that story with no frills, no gimmicks, no myths, and no pulled punches. It's real from jump.

Roxanne Roxanne places more onus on Shanté's path to notoriety rather than glamorizing how she transformed hip-hop-in sharp contrast to the conclusive glory of other rap biopics.

There are no featured audience reviews yet. Click the link below to see what others say about Roxanne Roxanne!