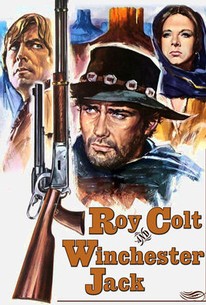 Genre specialist Mario Bava takes a rare trip out to the plains in this rousing comedy-Western that turns the work of iconic spaghetti Western specialist Sergio Leone on its head. When Roy Colt (Brett Halsey) and Winchester Jack (Charles Southwood) fail to make a living at living dishonestly, Roy resolves to dissolve the partnership and earn an honest dollar in Carson City. Unexpectedly greeted upon arrival at Carson City with a badge and a gun, newfound sheriff Roy gets that old familiar feeling when the nervous citizens entrust him with a replica of a stolen treasure map that is said to lead to a bounty of buried gold. Unfortunately for Roy, the mysterious Reverend Teodoro Corra, a dynamite-toting Russian outlaw; his old partner Jack; a Jewish desperado named Berenstein (Mauro Bosco); and a wanted Native American seductress (Marilù Tolo) are also gunning for the gold. By the time Roy reaches the Indian burial ground where the gold is said to be buried, it's anyone's guess as to who will get the gold first. ~ Jason Buchanan, Rovi

Owes more to the previous year's massively successful Butch Cassidy and the Sundance Kid than to the Spaghetti Westerns that helped define the 1960s.

Difficult to sit through and is roundly considered one of Bava's worst films.

Not only doesn't work-it stinks.

There are some great things about Roy Colt & Winchester Jack, but there are a lot more bad things about it. Mario Bava (who proves that westerns are not his bag) sets up some damn great shots, some that would rival Sergio Leone given a good cinematographer. But the music, overall flimsy plot (I know that Bava was never strong in that department, but this is abuse) and from out of left field Benny Hill-like whorehouse scene just kind of do it in. Too much comedy to be taken seriously--despite how silly "The Reverend" was. And not to sound like a sexist dick, but if some native girl is running off with my gold, I'm going to turn her skull into an ashtray instead of playing grabass with my buddy. But that's just me...