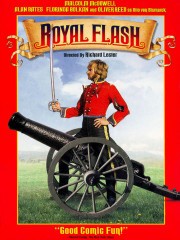 delysid d
November 21, 2018
i thought this was a cool movie thats almost as good as the 3 musketeers

Harry Flashman began literary life as a bullying schoolboy who was the villain of the popular Victorian novel (and modern TV series) Tom Brown's School Days. The character was adopted by Scottish author George MacDonald Fraser,as the anti-hero of a series historical novels beginning publication in 1969. The motif is that Flashman, grown up, is as villainous as ever -- a coward, liar, and philanderer, among other faults -- who through extraordinary good luck embarks on an army career which covers him with glory for his supposed courage, honor, gallantry, and other virtues. Over the course of these picaresque novels, Flashman meets most of the major historical characters of the Victorian age, as well as managing to be present at virtually every one of the era's major military disasters.

These books have a cult following, and people will feel differently about this film depending on whether or not they are fans of the series. The film Royal Flash was made by major director Richard Lester and features an excellent cast, including Malcolm McDowell and Alan Bates, and can be recommended to all as a well made period comic drama, with lots of intrigue, romance, and derring-do. You don't need to have read any of the books to enjoy the movie. Since the film, like the book, is deliberately based on The Prisoner of Zenda (the fictional pretense of Fraser's novel is that one of Flashman's adventures actually inspired the plot of the novel The Prisoner of Zenda,) fans of that book or of its subsequent film versions will find it has added interest. So that's the review fon non-cultists.

For those who (like myself) are real fans of Fraser's Flashman books, I'd make a slightly different recommendation. The novel Royal Flash is often considered by aficionados to be one of the weakest of the series, and some may find that McDowell's performance as Flashman and Lester's whole treatment are a bit too light and comic-opera like. But since this is, unfortunately, the only Flahman film ever made, fans of the novels will certainly want to se it, even if they find it somewhat disappointing.

I saw this on a Twentieth Century Fox Home Entertainment DVD which was of good quality.

Amanda Emilie M
May 28, 2013
This film is one of the funniest I have ever seen. I love the fight scenes. The comedy is just great where it is. Malcolm emboddies his character of Flashman to the very ends. He is perfect in this. the rest of the cast are really fun as well. Also nice to see cameos of two of my other favourite actors Alastair Sim and Bob Hoskins (in their respectivley last and first film).

Super Reviewer
Ed Fucking H
October 29, 2011
Malcom McDowell and Olver Reed, now theres a comedic duo. Really enjoyed this comedy from 1975. A little surprised more people havent seen in it, given the quality. Has a fairly complex plot, but keeps the laughs in regular supply. Several bad ass sword fighting scenes. Malcolm McDowell is really funny throughout. Alan Bates also definently has his moments. Florinda Bolkan is hot. All in all a really good time. More people need to see this one.

Martin B
August 21, 2011
Not bad costume comedy drama with always interesting Malcolm McDowell in the leading role as the coward english officer who ends up in trouble whereever he's going.

Flashman (McDowell) ends up in german territories that are evolving into a future Germany under the guidance of a young Otto von Bismarck.

Our hero (or at least the guy most things evolve around) is finding himself trapped and tries to flee most of the time and the story has got a few nice twists in the plot regarding who to trust and whp's on who's side really.

Great Fun. McDowell plays the officer bafoon great and others like Oliver Reed and Britt Ekland to that too. We also see Bob Hopkins and Inspector Morse and people from "Ivanhoe" here and there in small roles.

It's not A Clockwork Orange/Oh Lucky Man really, no, it's not, but it's a neat little film

Marilee A
July 13, 2011
This was on while I was working today. A bit silly withWomen Sword Fighting,Hair Brush Spanking, lots of Nympho's, etc.Because he was a perfect double of a Duke(Malcom McDowell), they kidnapped him,scarred his face, & forced him to pose as as the Duke & Marry the Beautiful Duchess (Britt Ekland), who then went from Prude to Sex Crazed Nympho too.More Spoof of the all too familiar Royal Impersonator Movies of the Times, more bumbling Doofus than Duke,more silly than serious movie of any substance.Fox Movie Channel gave it 4 Stars, honestly I'm having a hard time giving it 3 stars,if not for the Opulent Sets & some Funny, Sexy Romps, I'd be giving it 2&1/2 stars cause the story was not good, nor was the acting.

July 3, 2011
I've watched it this weekend on Fox Movie Channel. I remember seeing it on late night non-cable TV and didn't like it very much at the time. Now I know why: they cut out the good parts! They included what happened after Harry Flashman charmed the legendary Lola Montez, how Lola managed to be King Ludvig of Bavaria's mistress ("I don't believe they're real!" *Sound of ripped bodice* "No! The spiders! I don't believe THEY'RE real!"), how Harry defrosted a German Duchess and how Harry managed to escape death several times under impossible odds! While I wouldn't recommend it to fans of the Flashman Novels, I definitely would suggest it to fans of "bawdy" costume dramas like "The 3 (and 4) Musketeers" and "Tom Jones."

Lorelei A
½ May 2, 2011
Absolutely cracking historical romp which allows us to meet some of the great characters of the period. Malcolm McDowell versus Oliver reed as Bismarck is something to behold. Overloaded with good stuff. The best films of the 21st century are only a tenth as good as this.

Trey L
December 31, 2010
I knew I was going to like this movie when I saw the credit "And Oliver Reed as Otto von Bismarck." Royal Flash is based on the second of a series of novels (which I haven't read, but am now tempted to). What this film amounts to is a parody of/riff on The Prisoner of Zenda, with Malcolm McDowell, Alan Bates, Reed and the rest of the cast in fine form. If anything, the mixture of humor and action is a natural extension of the two Musketeers movies directed by Richard Lester only a couple of years earlier. If you enjoy that brand of comedic swashbuckling, Royal Flash is worth watching as well.

Steve R
September 29, 2010
The only attempt to date to bring George MacDonald Fraser's Flashman character to the big screen. The film doensn't have the time to develop the plot like the book does and cuts a lot of corners, but the main criticism of the film is the atempts to make it into a comedy film, removing Flashman's suave and conniving character from the film. It's interesting to see pre-fame Bob Hoskins and David Jason in cameo roles but the film doesn't really hold the interest for the duration. Read the book instead.

Stephen C
September 28, 2010
While not as good as Lesters own Musketeers films ,this period romp still has plenty going for it,most notably Lesters eye for the absurd and the down right funny.
Malcom McDowell is on top form as the cowarldy and roguish Flashman who find himself drawn into the world of shady european politics by Oliver Reed and Alan Bates .

Lester packs his cast with cracking cameos including Lionel Jeffries as a metal handed villain(Who gets some of the films best laughs) A befuddled Alistair Sim and early appearances from Bob Hoskins and David Jason.

The film also has some top notch action including a duel on a Bridge and a final Swordfight between Flashy and one of the villains.

Its a shame that Lester retired from directing as i for one am a huge fan of his films and i feel its time to reappraise his work as a director.

Super Reviewer
mirabella 1
½ February 5, 2010
What a fabulous romp!
It centres around the perils & adventures of the despicable Harry Flashman (yes, he who made Tom Brown's schooldays such unspeakable hell).
Featuring a stellar cast (including Malcolm McDowell, Alan Bates & Oliver Reed) who play it for laughs more than drama, this slapstick tale of derring-do is faultlessly directed by Richard Lester.
It is patently obvious when watching, just how much fun everybody was having. And this only increases one's enjoyment of the film.
Watch it in the spirit it was intende & I promise that you will enjoy it.

Brad W
October 31, 2008
Tried to cash in on the Three Muskateer70's success. Middling at best.

Another slow starter, and with a treadbare plot, but still provides enough entertainment to forgive its flaws. Who wouldn't enjoy a roguish Malcolm McDowell attempting to impersonate a German duke against his will after being kidnapped by a sinister Oliver Reed? Highlight is a side-splitting attempted rescue of the real duke held prisoner in a castle dungeon which includes a memorable comedic swordfight in the spirit of the Elwes vs. Patinkin throwdown later exhibited in The Princess Bride.

Matt P
September 20, 2008
What a freaking great movie. Malcolm is awesome as always. I laughed my head off. To bad a lot of people don't know about this movie. its a shame because it is one of the best.

Derek S
July 8, 2008
Not nearly as fun or exciting as the books. The humour is more "cornball" type silliness, which is something that I don't really see when I read the books. And a short, blond Flashy doesn't quite have the same tall, dark and handsome arrogance that the real Flashy should have.