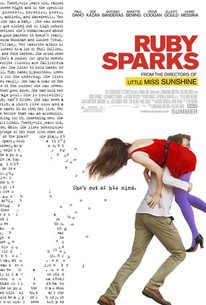 Critics Consensus: Cleverly written and wonderfully acted, Ruby Sparks overcomes its occasional lags in pace with an abundance of charm and wit.

Critics Consensus: Cleverly written and wonderfully acted, Ruby Sparks overcomes its occasional lags in pace with an abundance of charm and wit.

Critic Consensus: Cleverly written and wonderfully acted, Ruby Sparks overcomes its occasional lags in pace with an abundance of charm and wit.

Calvin (Dano) is a young novelist who achieved phenomenal success early in his career but is now struggling with his writing - as well as his romantic life. Finally, he makes a breakthrough and creates a character named Ruby who inspires him. When Calvin finds Ruby (Kazan), in the flesh, sitting on his couch about a week later, he is completely flabbergasted that his words have turned into a living, breathing person. -- (C) Fox Searchlight

Oscar
as Scotty the Dog
View All

Critics Consensus: The Watch Falls Down On the Job

Sometimes it's worth surrendering to cinematic enchantments, and Ruby Sparks makes a pretty good case for its own magic.

Sure it's been done before -- man brings ideal woman to life -- but not quite like Ruby Sparks. And that sets this film up to be a smart and romantic low-key comedy that goes beyond expectations.

If the result feels like a Pinocchio story that spends too much time with Geppetto, or a takedown of narcissism that never breaks free of what it's critiquing, Dano nonetheless makes Calvin compelling company.

Kazan winds up indulging in the very wish-fulfillment she initially sets out to deconstruct.

Ruby Sparks flirts with preciousness and has less fun with its premise than it could have, but that's because it's actually a gently touching metaphorical drama about the real essence of love.

Ruby Sparks might have been more fun if Cal were written to be expansive instead of a worrywart in the middle-aged Matthew Broderick mode.

Ruby Sparks, though it often tries the viewer's patience (sometimes intentionally, sometimes not), examines the dramatic fallout of this clash in an impressive way.

Ruby Sparks is an innocuous, forgettable place-holder: it contains appealing performers and characters pleasant to watch.

Ruby Sparks will make you want to fall in love the right way.

RUBY SPARKS is a romantic comedy with a subversive tone behind its concept and some sharp satirical bite.

Ruby Sparks gets its spark from Kazan. After being mostly a bit player in a handful of films, the 29-year-old actress shows she is more than capable of stepping into lead roles. She's also not too bad at screenwriting as well.

What first seems like a simple one-joke romantic comedy turns out to be about so much more: a deeply honest and sad story about the selfish (but real) need that some people have to control someone else so they can feel loved and make an ideal relationship work.

Dr. Frankenstein, whatever his incarnation, is always surprised to discover that his creation has ideas of its own, doh!, and so it goes in this romantic comedy (with a couple serious messages thrown in to round the whole thing out some). The old absolute power corrupts absolutely angle could've used more airing here, but by and large this is just another cute romcom.

Starts out charmingly as a frothy, wish fulfillment romantic fantasy. Had it stayed with that concept it would have been a cute comedy unfortunately about 3/4 of the way through the male lead starts acting like an incredible jackass and the film turns dark never finding its footing again. A disappointing miss.

A novelist's main character comes off the page and becomes his real-life dream girl. In its epistemological themes and its depiction of malignant patriarchy, Ruby Sparks is profound and intellectually satisfying, and it's to the film's credit that it balances heavy philosophical issues with comic relief. The creation of a dream girl, a quirky and willing beauty, seems attractive on its face, but the power this task involves makes one question whether it is appropriate. And once God - the author Calvin in this case - is given too much power, what happens to the automaton, his creation. *Spoiler Alert* The theme is better expressed had it ended sooner, without the expectation of happiness. Paul Dano is quickly becoming one of my favorite actors. His lanky mawkishness is balance by the clarity of his expression, and he has a talent for choosing only the most promising projects. Overall, I really liked this film because it's both deep and enjoyable on the surface.