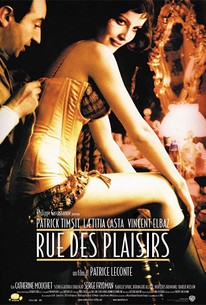 Patrice Leconte directs the period drama Rue des Plaisirs, set in Paris during the 1940s. Born to a prostitute, Petit Louis (Patrick Timsit) grows up in a brothel called the Oriental Palace. He is raised by the family of prostitutes and eventually becomes the brothel's handyman. Having developed an idealized romantic nature, Petit Louis instantly falls in love with the new girl, Marion (supermodel Laetitia Casta). Though she doesn't return his affections, he shows his love by finding her auditions to develop her singing career. He also tries to find her the perfect mate in Dimitri Josco (Vincent Elbaz), who ends up being less than expected. After the end of World War II, the government shuts down the brothels just as Marion, Petit Louis, and Dimitri find themselves in trouble. ~ Andrea LeVasseur, Rovi

Samuel Labarthe
as Client
View All

There are no critic reviews yet for Rue des Plaisirs. Keep checking Rotten Tomatoes for updates!

There are no featured reviews for Rue des Plaisirs at this time.