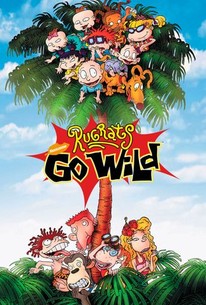 Critics Consensus: The Rugrats franchise has gone from fresh to formulaic.

Critics Consensus: The Rugrats franchise has gone from fresh to formulaic.

Critic Consensus: The Rugrats franchise has gone from fresh to formulaic.

When the Rugrats family vacation goes awry, they suddenly find themselves on a deserted island. Hopelessly stuck in the middle of nowhere--without cell phones or cookies!--the Rugrats encounter lizards, leopards and bug eating plants, not to mention the wildest discovery of all--the Thornberrys! But poor Spike isn't having nearly as much fun. His sniffer is on the blink and his reckless Rugrats are wandering through the rainforest alone. Can Eliza Thornberry, who speaks fluent Dog and all animal languages, help the hapless rugmutt find his diapered gang before Siri the white leopard turns their island adventure into a castaway's nightmare?

Chrissie Hynde
as Siri the Leopard

The Rugrats
View All

"Transformers" Find a Fox in Their Midst
Critical Consensus: A Swinging "Party," A Sweet and Sour "16"

The worst thing about Rugrats Go Wild is that the Rugrats have dragged the Thornberrys down into the diaper bag with them.

Unless you're a Nickelodeon executive or a six-year-old who's never heard of Pixar, you'll be fervently hoping such desperate tactics signal the end of this tiresome spin-off franchise.

As matinee probations go, the movie's tainted by too many bad songs and too much of Bruce Willis.

[T]his is harmless entertainment for very young children. Everyone else though, will be wriggling in their seats like 2-year-olds with wet diapers.

It's a message movie, as are all kids films these days, but these environmentally-aware messages are sweet and unforced, and well worth hearing.

If you dismiss the flaws and pretty unimaginative plot line, you'll really have some fun with the film...

[T]his is more like a TV sweeps month stunt than the beginning of new chapter of Rugrats history.

Nothing about Rugrats Go Wild is particularly bad or crass; it's just exhaustingly mediocre.

As a Rugrats neophyte, I found it hard to understand what makes them so beloved: their voices are shrill and charmless, and so much of the humour springs from grating babytalk.

A good crossover but it has one thing i dislike about it, Bruce Willis as Spike. It just seems out of place for him to play Spike

This was both boring and entertaining. Liked their adventures, there was some sad moments.

Totally substandard compared to the cartoon.