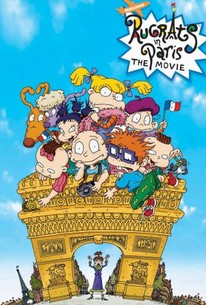 Critics Consensus: When the Rugrats go to Paris, the result is Nickelodeon-style fun. The plot is effectively character-driven, and features catchy songs and great celebrity voice-acting.

Critics Consensus: When the Rugrats go to Paris, the result is Nickelodeon-style fun. The plot is effectively character-driven, and features catchy songs and great celebrity voice-acting.

Critic Consensus: When the Rugrats go to Paris, the result is Nickelodeon-style fun. The plot is effectively character-driven, and features catchy songs and great celebrity voice-acting.

Rugrats in Paris - The Movie Videos

Rugrats in Paris - The Movie Photos

The adorable Pied Pipers of diapers return in this cartoon charmer, which finds the toddlers frolicking in Paris. But the gang gets into a pickle when a wicked theme-park executive (voice of Susan Sarandon) schemes to marry Chuckie's widowed dad for her own selfish gain.

News & Interviews for Rugrats in Paris - The Movie

View All Rugrats in Paris - The Movie News

Critic Reviews for Rugrats in Paris - The Movie

Nauseating gags suggest the makers of this eclectically animated adventure... know their audience, though all the Godfather references will be thoroughly puzzling to at least half of it.

This is one kids' film that's actually quite charming.

Musically ... the Rugrats sequel is a big step backward.

We get nauseating homilies on the values of friendship, family, and parenting and a soundtrack full to bursting with vacuous pop acts.

Just as good as the last outing, this is great kiddie fare with some filmic references for the adults.

The character work is strong, and the celebrity recruits are fun.

Offers plenty to amuse the young and young at heart.

Everything considered, the Rugrats movie franchise remains lively and secure, but the Pickles family and friends might want to choose their next travel agent with more care.

Not as fresh as the first film.

The writing team is adept at childish malapropisms and the skewed perspectives of 5-year-olds, but the characterizations and plot lines are witheringly simplistic.

Audience Reviews for Rugrats in Paris - The Movie

And here we are again with the inevitable sequel to the first average [i]Rugrats[/i] movie. This movie would see a dramatic shift in the series as new major characters were added that would carry on with further new series on TV. The main question yet again was, could this movie give us a better plot? Umm...well kinda, I guess, sorta. So what is the most tried and trusted plot line for a kids movie (adaptation)? Well we saw that in the first movie. Through a set of unusual circumstances the kids get lost in the wilderness and have to fend for themselves while the parents have to find them. So whats the second most tried and trusted plot for a kids movie (adaptation)? Usually its the old change of location gimmick, in other words stick all the regular characters in another country and voila! An Instant flood of safe and easy ideas suddenly present themselves with the obvious cultural differences and of course a brand new look. So for this new adventure the whole Pickles family (with the Finster's and DeVille's) are off to Euro Reptarland in Paris, France because Stu Pickles must fix the giant Reptar robot he built for the Yamaguchi company (parent company of the Reptar franchise). The head of Reptarland (a cold-hearted 'Cruella De Vil' type woman called Coco LaBouche) learns that Yamaguchi Industries president Mr. Yamaguchi is retiring and wants his replacement to be good with children as well as good at the job. So with some inside info from the naughty Angelica LaBouche sets her sights on Chas Finster. The movie follows a few mini plots as LaBouche tries to seduce Chas in order to gain Mr. Yamaguchi's favour and his job. Spike the dog gets lost (because of course) and ends up running into a French poodle and falling in doggie love. Chas accidentally meets LaBouche's assistant Kira who has orders to help LaBouche win over Chas, but ultimately falls for him. And Tommy, Chuckie, Phil, Lil and Kimi (Kira's daughter) attempt to reach a Princess who, according to the Japanese Reptar origins, tamed Reptar. Said Princess is in fact an animatronic robot in the Reptarland amusement park. Chuckie believes the Princess would make an excellent mother for himself (in the [i]Rugrats[/i] world Chuckie's mother died of cancer just after he was born). Right so lets get stuck in here. Its unfortunate that this movie hasn't really cleaned up its act from the previous movie. Instead of going back to the franchises roots so to speak, they have doubled down on everything they did wrong (in my opinion). For starters we have numerous hideous songs again, again with the cringeworthy songs...ugh! Why oh why did they do this?? The cartoon didn't have songs, it didn't need songs...why??? Secondly, yet again we have more forced modern pop culture references aplenty along with the obligatory R&B/hip-hop song over the end credits, because of course we do. Apparently every single damn kids movie needs an R&B/hip-hop song on the end credits. Admittedly this movie does look quite sumptuous I'll give it that. Clearly a mark up on the original movie in terms of scope, detail and big bold vivid colours. Reptarland certainly does look wonderful with its blend of a typical amusement park (obviously a Disneyland Paris rip-off) with traditional Japanese stylings. That sounds odd I know but believe me its quite beautiful with all the pagodas, people in traditional Japanese attire, famous woodblock print art, giant Reptars etc...It really does make you wanna go to this park. Alas being a modern movie they couldn't help using CGI...a lot. Again its better and less obvious than the first movie but it still wrecks the whole artistic vibe if you ask me, it just doesn't fit in with these cartoons. Things take a turn for worst again though unfortunately with the pointless and god awful [i]Lady and the Tramp[/i] rip-off subplot with Spike. Spike gets lost and roams the streets of Paris eventually coming across a French poodle...that just happens to be female of course. Naturally they fall in love and venture off together through Paris sampling its delights which eventually cumulates in the predictable eating of pizza in an alley. Oh and yes they do rip-off that very famous moment where to duo accidentally kiss whilst eating, oy! In the meantime because Kira and Kimi are Japanese, and Reptarland is in partnership with a Japanese company, everything the families do in Paris is Japanese influenced despite actually being in France. Nothing against Japanese culture, bloody love it! but it just felt kinda weird ya know. But I suppose that did mean we didn't have to suffer a tonne of stereotypical French cliches and tropes. Although the entire Reptar thing is of course a [i]Godzilla[/i] rip-off and you just know they had to include a kaiju face-off (Reptar vs Robosnail). So in the end once again this movie is much like the first movie and gives us little imagination from the babies. Instead we get another reality driven plot which is merely in place to further the franchise for a new TV series, basically a lot of padding. In all honesty this could have been done in the cartoon series over an extended episode, something they have done many times before, there was really no need for a movie. So instead of something a bit more fanciful from the babies perspective (the whole original premise), its just a humdrum love story with too many mini plots and characters. Its definitely a bit more exciting than the first movie, definitely more gorgeous to look at and definitely has more movie star voice work, but its still lacking and just can't compete with the cartoon series.

The Rugrats are at it again! This time... they're going to Paris! Just think about what's in the movie. Averagely good in 2 words.

a huge improvement over the first

I use to enjoy Rugrats on TV. The Movie was okay.

Rugrats in Paris - The Movie Quotes