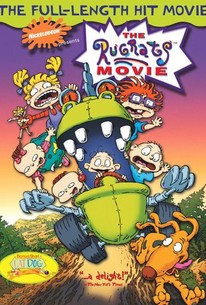 Based on the popular Nickelodeon TV series Rugrats, this is the first full-length feature animated movie to star the little tots. It's the story of diaper-clad kids, told from a baby's point- of-view, and they were one of the hottest-selling toy franchises of the late '90s. The film features a hilarious musical number in the hospital nursery, where newborns have the voices of major rock stars that include Jakob Dylan (Bob Dylan's son), Iggy Pop, Lou Rawls, Lisa Loeb, and Patti Smith, to name a few. The story escalates when self-proclaimed leader Tommy Pickles is thrust into an impossible situation with the birth of his new brother, Dil Pickles. This new kid is grabbing all the attention and won't stop crying. With the help of other toddlers Lil and Phil, Tommy decides that the baby should be returned to the hospital for fixing. They all hop on their little wagon and take a high-speed ride straight into the deep woods where they realize they're lost. Chased around by animals (or so they think), the Rugrats clan must get home in one piece. Other celebrity voices include Whoopi Goldberg and The Rocky Horror Picture Show's Tim Curry, as well as Saturday Night Live's Andrea Martin and David Spade. ~ Chris Gore, Rovi

News & Interviews for The Rugrats Movie

View All The Rugrats Movie News

Critic Reviews for The Rugrats Movie

Kids will love it, parents may not.

The result is several steps above the clunky, offputting animation of the series' early episodes.

Makes little effort to reach beyond its target audience.

Fun for kids, but, despite some adult references, appeal for the over 10s is limited.

The dialogue reproduces infantile idiom even as it parodies the baby talk of adults, and a touching, didactic scene involving a baby blanket that's become the object of sibling rivalry may appeal to a broad age range.

Those unfamiliar with the series will have a chance to marvel at Klasky and Csupo's refreshing innovations: their affectionate play with traditional presentations of 'sweet' baby behaviour and 'pretty' toddler looks.

I think it's super cute.

Intermittently snappy and featuring slicker animation than its TV incarnation, this popular children's cartoon may satisfy its youngest fans, but it'll be a big snoozefest for the rest of the family.

A host of cooler-than-cool voices/cameos (Reed, Anderson, Curry and the B52s) and throwaway humour do keep the adults happy the whole time.

Like many children's films, The Rugrats Movie is told from the point of view of a boy who enjoys a wonderful relationship with another boy.

Audience Reviews for The Rugrats Movie

Tommy Pickles: Yo-ho-ho and a bottle of yum!  "An adventure for anyone who ever wore diapers." When I was a little kid, my favorite cartoon on television was Rugrats. I could watch it all day long. I remember watching this movie when I was little as well. I remember liking it, but I also remember, even as a little kid, thinking it wasn't as good as the tv show. This movie is short, and that's one of its few positives. It's got a quick paced feel to it is as well, so the whole film just speeds by. After it does, you're left with a lot of disappointment, especially if you are a lover of the cartoon. Tommy is excited for the arrival of his new baby brother. When he comes home, everything isn't as great as he thought. The baby cries all the time, and is extremely selfish. When an accident happens leaving the four friends and the new baby on their own in the wilderness with Angelica and Spike on their heels; a search team is put out to find them. The babies battle a wolf and a bunch of monkeys, in order to make it to the lizards house. Most of the writing for this movie centers around the babies mispronunciation of words. It's cute a few time, but the extent to what it is used gets quite annoying. The songs are annoying as well. I guess that's the lasting impression of The Rugrats Movie. It's annoying. I was annoyed by the adventure, by the situations, by just about everything. It's just a big disappointment.  If you want to introduce your kids to one of the best cartoons ever; do it through the television show and not this sorry excuse for a movie. This doesn't come close having the same fun feeling the series had. A lot of that may come from the television adventures only being fifteen minutes each. When you have to fit a plot into a feature length movie of an hour and twenty minutes, it gets a little harder. So, I'll cut them a little slack.

An okay film version of an okay kids cartoon. It's nothing special, and it's a lot like the show too. Overall, it's okay.

its no masterpiece but it was pretty good