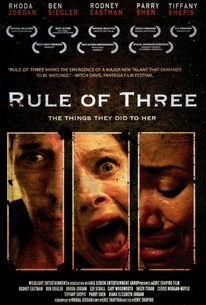 Award-winning Days of Allison author Eric Shapiro makes his feature directorial debut with this character driven mind-bender set in the same hotel room over the course of three distinct timelines. Jon Morrow is a middle-aged father whose adolescent daughter has been missing for weeks. Frustrated at the lack of police follow-ups and realizing that the leads dry up with every minute lost, Jon decides to take the law into his own hands by packing a gun and returning to the hotel room where his little girl was last seen. This isn't the first time that Jon has returned to the hotel in search of clues, but this time he discovers a mysterious, unsigned note left on his car. Flash back to a few weeks prior, as Jon's daughter and her boyfriend check into the hotel, and it's revealed that very same room had previously been occupied by a nervous businessman and a ruthless drug dealer involved in a sleazy and dangerous game.

Critic Reviews for Rule of Three

There are no critic reviews yet for Rule of Three. Keep checking Rotten Tomatoes for updates!

Audience Reviews for Rule of Three

There are no featured audience reviews yet. Click the link below to see what others say about Rule of Three!