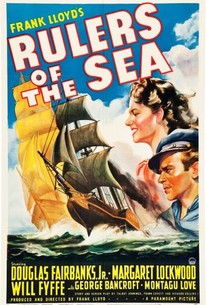 Rulers of the Sea Photos

In the 1830s, despite the development of the steamboat at the outset of the 19th century, all trans-Atlantic travel was still done by sailing ships. David Gillespie (Douglas Fairbanks Jr.) is first mate on one of the fastest of such ships, commanded by Captain Oliver (George Bancroft), but he is sickened and wary of the loss of life of sailing men caused by the limitations of sail. He meets John Shaw (Will Fyffe), a Liverpool-based machinist who insists that he has a design for an engine and a ship that will allow safe trans-Atlantic travel by steam power, and the two go into partnership -- but Gillespie must contend with the resistance of Shaw's headstrong and skeptical daughter, Mary (Margaret Lockwood), as well as the resistance of bankers and other shipbuilders to the new ideas he represents. All of this pleases Mary, who, despite her love of her father and attraction to Gillespie, regards herself as practical-minded and wants her father safely back working for his old employer on a steady salary, instead of pursuing what she regards as impossible goals. Gillespie gets the backing and Shaw builds his engine, but his ship is burned in an accidental fire, and all looks lost until a sympathetic backer proposes fitting the engine to an existing vessel, and suddenly Shaw is a real threat to the shipping establishment. They try to stop him in the courts, and when that fails, the race is on from Liverpool to New York, between Shaw's steam-powered ship and Gillespie's sail-driven former ship, with Mary aboard to look out for her father and Gillespie, and the future of ocean travel in the balance.

Will Fyffe
as John Shaw

Critic Reviews for Rulers of the Sea

There are no critic reviews yet for Rulers of the Sea. Keep checking Rotten Tomatoes for updates!

There are no featured reviews for Rulers of the Sea at this time.

Rulers of the Sea Quotes