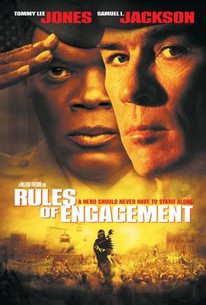 Critics Consensus: The script is unconvincing and the courtroom action is unegaging.

Critics Consensus: The script is unconvincing and the courtroom action is unegaging.

Critic Consensus: The script is unconvincing and the courtroom action is unegaging.

In this drama, two U.S. Marines who stood side by side on the field of battle are reunited in a court of law. Attorney Hayes Hodges (Tommy Lee Jones) once aspired to a career as an officer, but a serious injury in Vietnam put an end to his military future, leaving him bitter and resentful. Col. Terry L. Childers (Samuel L. Jackson) fought alongside Hodges and once saved his life; when Childers is threatened with a court martial for ordering his troops to fire on civilians during a raid on an American embassy, Hodges is the only lawyer that he can trust, and the case gives Hodges a chance for revenge against the military system that he feels has wronged him. Rules of Engagement also features Kim Delaney, Ben Kingsley, Blair Underwood, and Anne Archer. ~ Mark Deming, Rovi

Critic Reviews for Rules of Engagement

Written with such murderous gravity, certainty and gloomy solemnity ... that it tends to kill our interest.

A broad and obvious approach to ambiguous material that's virtually all plot mechanics with little nuance or characterization.

What distinguishes Rules is its use of xenophobia to bolster its legal arguments, and presumably tap audience's deep-seated prejudices.

This movie is a blunt object -- blunt, but not particularly effective.

At their best, [Jackson and Jones] are merely two of the most cunning, commanding performers in all of movies.

A military drama scared to face its demons.

If the makers hadn't stuck so closely to the rules, this film would have been far more engaging.

A flag-waving military drama that ultimately buys into a militaristic 'my country, right or wrong' philosophy.

Audience Reviews for Rules of Engagement

A mostly enjoyable distraction big on capturing the style of the marines but one that's a little short on plot; in a post-CSI world, I feel like they could have just done the 20-minute forensics and told us where the fire was coming from, and not needed half a movie of trial coverage to predictably get to the bottom of it. An interesting relic, though, as it is one of the few films that raise the spectre of terrorism originating from the Middle East before 9/11. And this was on TBS (sorry, I guess it's Peachtree now) like two days before the U.S. Embassy in Yemen was bombed last week... that's creepy, right? Anyway, Tommy Lee Jones is quite good (as always), Sam Jackson held his own, and while I wouldn't go out of my way to see it, it was at least engaging (haha) enough to watch front to back, no matter how many f-bombs were replaced with "forget".

A decent war drama war as a mission is investigated in court to find out what happened.

An intensely gripping, nail-biting and exhilerating military thriller. Compelling, memerising and very exciting. A mixture of strong court room drama and some explosive action. Tommy Lee Jones and Samuel L. Jackson give electrifying performances. These two heavyweights deliver the greatness, showing us why they are indeed superstars. Abslolutely unforgettable and powerful. A superb and tremendous film. Director, William Friedkin's finest film. A classic. It grabs you and dosent let go for a second.

[font=Arial][color=darkred]Samuel L. Jackson and Tommy Lee Jones are old war pals who took seperate paths after a cataclysmic ambush in Vietnam. Jackson went on to a prestigous career in combat but Jones was restricted to desk jobs the rest of his tenure. It appears Arabs are at their old tricks again, being that without Nazis or Communists they are Hollywood's favorite misrepresented bad guys. Jackson gets dispatched to protect a US embassy besieged by protests. During the meelee of confusion Jackson orders fire on the crowds outside. Now he has to face the ramifications which include murder charges and a tangled web of conspriacy.[/color][/font] [font=Arial][color=darkred]Jackson gives an electric performance as the Marine Captain full of sound and fury. Jones and Jackson exhibit great chemistry together under William Friedkin's deft hand. Friedkin, known for classics like 'The Fench Connection' and 'The Exorcist', whose last pic was the Caruso stinker 'Jade', has crafted exciting sequences of action and suspense. The problem is they all happen early and the film undwinds and unspools as it continues.[/color][/font] [font=Arial][color=darkred]Bruce Greenwood seems to be making a career out of beguiling Jones. In last fall's 'Double Jeopardy' he was a slimy not-so-dead hubby, and in 'Rules' he's a slimy National Security advisor. These two look like they'll be the Ben and Matt of the over fourty crowd.[/color][/font] [font=Arial][color=darkred]'Rules of Engagement' is a coutroom action/drama that plays closely to the rules established but coasts on terrfic performances from its leads and some dynamite action sequences. But eventually the weight of the plot drags 'Rules' from the potential it flashed.[/color][/font] [font=Arial][color=darkred]Nate's Grade: B- [/color][/font]