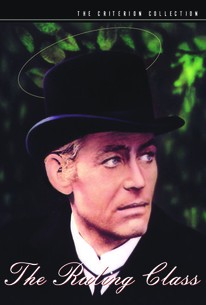 An institutionalized schizophrenic with a Messiah complex inherits the position of an English Earl in this cutting satire of British society, based on a play by Peter Barnes. The film's irreverent tone is established with the disturbingly hilarious death of the thirteenth Earl of Gurney during a bizarre attempt at auto-erotic asphyxiation. To the dismay of the earl's family, the title passes to his son Jack (Peter O'Toole), who has been locked away for eight years after claiming to be the second coming of Jesus Christ. Mad but harmless, Jack is released to assume his seat. However, his embrace of Christianity proves incompatible with a position of power in "normal" society, where peace and love are considered serious weaknesses, and a somewhat unhinged psychiatrist is called to help him adjust. Meanwhile, Jack's scheming uncle, Sir Charles (William Mervyn), works on developing a complex scheme to trick Jack out of his position. Loaded with idiosyncratic touches from eccentric camera angles to unexpected outbursts of song, the film creates an experience nearly as inspired and mad as O'Toole's brilliantly hilarious central performance. The film's devilish invention may at times seem overloaded, but most drawbacks are redeemed by the sharpness of the satire, particularly during the memorably disturbing finale.

News & Interviews for The Ruling Class

View All The Ruling Class News

Critic Reviews for The Ruling Class

We get no real feeling that it knows where it's going, and every good comedy needs a certain headlong conviction.

The Ruling Class is that rarity, a successful, satiric film. No other genre is so plagued by good intentions and regrettable results.

In spots a very amusing and irreverent tongue-in-cheek satire on class that features a tour de force performance by Peter O'Toole.

The plot is convoluted but director Peter Medak makes some good satirical points about the British class system and Peter O'Toole is terrific in a well-deserved Oscar-nominated performance.

decidedly postmodern several years before it became a buzzword

Audience Reviews for The Ruling Class

I was surprised by how thrown-together this movie seems to be. It is definitely ambitious in its biting social commentary; but, in the end, it ends up falling victim to its own outlandish charm. What starts off as a funny and searing look at British artistocracy quicky spirals into an acid-trip of a movie that is as discombobulated as it is filled with acting talent that is severely misused. Mind-blowing potential; mind-numbing payoff.

Top performance from O'Toole, with exceptional supporting work, especially from renowned character actor Alastair Sim. Fantastic dialogue, but that is because the script is adapted from a stage play (and the adaptation done by the same writer); at moments it is easy to tell that this is a stage adaptation even if you didn't know because of the short asides into the camera and general elevated form of dialogue. The selected filming locations are exquisite and film beautifully. Next to O'Toole's performance, my favorite element of the film is that it chooses to overtly blur the line between an objective reality and the subjective reality Jack is experiencing by seamlessly sewing the two together when the situation warrants it. First two thirds of the film is a romping satire and mostly all-out fun, which contrasts with the quickly darkening melodrama of the final act. Some viewers will be jarred by this transition, just as some other viewers won't recognize that the supporting characters are being genuine when they suddenly align themselves with Jack (when the prior scheme had been to remove him from his inherited lordship and return him to permanent mental illness institution). Even if the relationship chemistries feel weak at times, the main character's struggle never feels false but indeed takes on a mythical quality. This is a movie where I WANT so badly to rate it four stars, but I just feel that the scene progression jumps over some long periods of time too easily and that perhaps the scenes picked to be in the film aren't always the most significant to Jack's life (but perhaps that is because many of the scenes are of his most critical moments so anything else will feel pointless in comparison). Some of the editing is a bit rough, but I reckon that's because this was this director's first big outing. Bottom line is that the writer Peter Barnes delivers an excellent satire of English society, perceptions of mental illness, the "eccentric wealthy" character-type, family quarrels, and of the abuse of power and privilege.

Offbeat to say the least. A very game cast frolics their way through this weird hybrid of a film. Peter O'Toole gives his all to the part and Coral Browne is terrific in as the pragmatic sister in law.