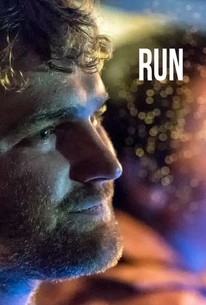 The Northern Scottish town of Fraserburgh; where boys become men through late-night drag racing as they dream of escapism. Like many, Finnie, a 36-year old former street racer, now works at the local fish factory with his teenage son, who is slowly following in his footsteps. One night, struggling to deal with his inner turmoil, and no longer able to ignore the fact that he's going nowhere, he decides to go for one final joyride and risks losing his family forever.

Stanley and the film simmer with sex and violence.

Short and sweet to the point of feeling slight in retrospect. But certain scenes sear the brain.

Well played and well shot, Run's idea of relocating Springsteen's America to a rain-swept Scottish fishing town is interesting, but sadly it runs out of gas and road before it hits the horizon.

It's a film with echoes of Andrea Arnold and perhaps Ken Loach - but Graham is a local boy, and brings a sense of place and character that is all his own.

"Run" has been adapted and expanded from one of Graham's earlier shorts, and it finds him closer to the taut, textured form of his debut, notwithstanding the lean script's odd lapse into cliché.

The sketchiness of the premise doesn't really favour the full cinematic treatment it has been awarded here.

Maybe a more ambitious plot would have given the heroes more opportunities to show their human qualities and flaws, and the audience more to engage with.

The fact that in a thrifty 76 minute runtime we feel like there's a real journey and sense of growth is a quietly impressive feat.

Run is essentially a sombre story, and at first glance you fear it could be another doom-laden misery fest. But terrific performances, particularly from Stanley and Marli Sui... and some wonderful writing make it shine.

At its core, Run is about being mature enough to recognize your glass is half full.

A sombre, tightly-edited exploration of masculinity in crisis. Stronger on atmosphere than story, it gains weight as it edges towards a rare moment of hope.

Writer-director Scott Graham and his gifted cast skilfully bring out an identifiable sense of yearning, the desire to escape from dull responsibilities of everyday life. So even if it feels slight, the film is packed with gorgeously resonant moments.

Rich Cline
Shadows on the Wall
View All Critic Reviews (15)

There are no featured reviews for Run at this time.