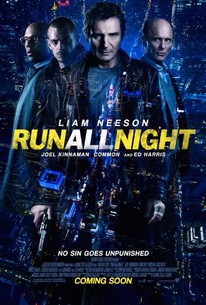 Critics Consensus: Liam Neeson is in typically fine form, but Run All Night suffers from a convoluted plot and workmanlike execution.

Critics Consensus: Liam Neeson is in typically fine form, but Run All Night suffers from a convoluted plot and workmanlike execution.

Critic Consensus: Liam Neeson is in typically fine form, but Run All Night suffers from a convoluted plot and workmanlike execution.

Liam Neeson reunites with Unknown director Jaume Collet-Serra for this Warner Bros. thriller following a mob hit-man and his estranged son (Joel Kinnaman) as they flee the wrath of a vengeful crime boss. ~ Jason Buchanan, Rovi

News & Interviews for Run All Night

View All Run All Night News

Critic Reviews for Run All Night

Run All Night is a satisfying tale of revenge and regret, with carefully crafted characters, and thrilling action.

If you appreciate this kind of guff, then Run All Night, despite its slow spots, is a fairly good yarn.

In the main, Jaume Collet-Serra is making a character-driven drama about betrayed honor, and the result is a film closer in spirit to the baggage-rich crime novels of Dennis Lehane than dumb multiplex fare.

For the most part ... it's a film about Neeson punching and shooting people while looking a bit bedraggled and a touch hungover.

Run All Night is a taut, edgy affair that features Neeson in peak action form and allows him to partially atone for the indignity of Taken 3.

The efforts to examine Neeson's Irish guilt aren't nearly as interesting or well done as the action story.

Neeson's character is a highly entertaining, levelheaded, cool-under-pressure persona that has yet to grow tiresome.

"Run All Night" proves once again that you shouldn't mess with Liam Neeson's kids.

Run All Night isn't perfect, but it is perfect at being what it's trying to be.

At this point, there is just one Liam Neeson movie: Taken a Non-Stop Run All Night to Walk Among the Tombstones 3.

Run All Night is a fine, if flawed, addition to the ever-growing catalogue of "Neesploitation" films.

Phil W. Bayles
One Room With A View
View All Critic Reviews (186)

Audience Reviews for Run All Night

In his third collaboration with Liam Neeson (who is great in his badass persona), Collet-Serra does play the exhibitionist sometimes, but at least he manages to make this average movie dynamic and fresh despite all of its expository dialogue and how forgettable it is.

A full-throttle and white-knuckle action-thriller that packs serious amount of fire-power and star-power. A hard-edged, powerful and sensational action-packed thriller that will keep you on the edge of your seat from beginning to end. I loved it. It has a strong story and with strong character development. This is Director, Jaume Collet-Serra and Liam Neeson's third collaboration together and they never fail to entertain when they get together. Liam Neeson is at his best, he gives a great and gritty performance. Ed Harris is brilliant. Harris and Neeson are a blazing pair of opposites that shine in their scenes together. Joel Kinnaman is excellent. This movie rocks

A mindless shoot em up that doesn't require to much thinking. I'll watch anything with Liam Neeson!